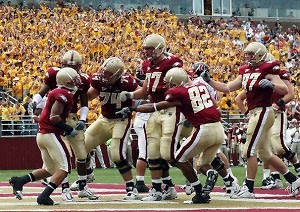 College Football Season again! We've updated our watch party guide with all the 2010 locations, parties, drink specials, and anything else you need to know to have a good season. See? Who says New Yorkers don't care about football?

Alabama: Crimson Tide fans can watch every Alabama game at The Ainsworth, where apparently the Staff will be decked out in red and white, and there will be drink and food specials for Alabama fans.

Arkansas: Arkansas fans can kick off the 2010 season with (what else?) a pig roast at the Overlook Bar roofdeck. It "smells like hogs!", which, for Arkansas fans, we imagine is a good thing.  The rest of the season, grab your hoghats (pictured here, if you, like me, have no idea what a hog hat is) and head to the official watch parties at Mad Hatter Saloon, where they're apparently serving Rotel. (No idea what that is. Arkansas fans, care to enlighten us?)

Arizona State: Bleecker Heights Tavern upstairs from Five Guy Burgers (which you can bring inside) is the most likely place to hear the AS fightsong, per a commenter.

Baylor: "Game watch at Third and Long on 35th and 3rd", per commenter

Berkeley: God, it's great to be from California, isn't it? Manhattanite Cal Fans can cheer on the golden bears at The Australian, while Brooklynite fans (and, let's be honest, most Berkeley grads live in Park Slope, right?) can head to Pacific Standard on game days.

Boston College: Eagle Fans can head to Still in Gramercy to cheer for their team!

Clemson: "Clemson U gathers at Ship Of Fools uptown at 82nd and 2nd or at Southern Hospitality at 76th and 2nd."--commenter 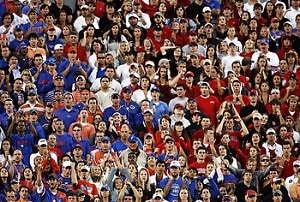 Colorado: Bar XII is the official watch party spot for the Buffs, so go there and be...buffy, or something.

UCONN: Cheer on the Huskies at Van Diemens on 3rd Ave, and get a free shot every time UConn gets a touchdown!

Duke:  On October 6th, DCNY is hosting an "NYC Forever Duke Welcome Party" at Brother Jimmy's, where Duke alums can gorge on free BBQ. As for their 2010 Watch Party spot, according to the website, it's "TBA". How unlike Duke to be unorganized about this! We'll keep you posted when it's announced...

Florida State: FSU has got it together this year! They already had a pre-season party on July 29th, and have presumably been getting pysched about football season ever since. The official go-to spot for Seminoles this year is Saloon on the Upper East Side (owned by an FSU grad). On Game Days, you'll find live music, a bean bag toss tournament (sounds lame, but the winner gets a free bar tab!), and FSU beer pong.

University of Florida: Are you a Gotham Gator, "taking a bite out of the Big Apple"? (Heh.) The Gin Mill on the Upper West Side is a favorite Gator gathering, but downtown UF fans can head to Sidebar in Union Square. (We recommend the Gin Mill though--they have orange jello shots!)

Georgia Tech: Cheer on the White and Gold at The Playwright Pub on 35th Street, where GT fans will have a private room on game days.

Georgia:  Offical Game Watch parties will be held at the Village Pourhouse. Because no dawg should bark alone...

Iowa: Are you a Hawkeye fan? Then head to Opal Bar. Hawkeye Specials include $5 nachos and $1 shots every time Iowa makes a touchdown.

Illinois: NYC isn't exactly Champaign, but whatevs, you can still celebrate your awkwardly controversial mascot at The Australian, and enjoy $3 'Fighting Ilini", aka some sort of blue shot.

LSU: Legends is once again official spot for LSU games this season. Drinks specials galore. Do you know what Geaux Tigers means? Yeah, that just means "Go Tigers", but spelled ridiculously. Who knew?

Maryland: Terps will be meeting up for games at The Copper Door Tavern. Bring your Terp spirit and get drink specials all night long. Fuck Duke.

Miami: There's a Hurricane Warning at Brother Jimmy's on Lexington.

Michigan:  Basically, if you walk into a New York Bar on a Michigan game day, there's about a 30% chance you'll walk into a UM Game Watch. These guys are everywhere, including Brother Jimmy's Union Square and Professor Thom's. For the full list, go here.

Ole Miss: Cheer on the Rebels at The Wharf, the official Watch Party spot for 2010.

Missouri: Tiger fans can put on their black and gold and watch Mizzou at Blackstone's on 55th and 2nd Ave, according to a commenter. 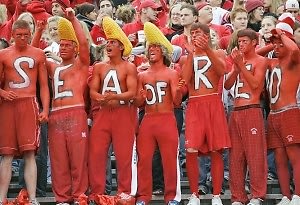 Nebraska: Husker Fans can gather at The Irish Rogue in Hell's Kitchen. Maybe you'll run into Rachelle there?

North Carolina: According to Chapelapple (kudos for having the cleverest alumni association name, btw),  Brother Jimmy's BBQ in Murray Hill and The Ainsworth are the Tarheel spots this year, with drink specials at both.

Notre Dame: It's sort of hard to believe Notre Dame fans won't all be flying back to South Bend for the games, that's how intense they all are, but the Mighty Irish who are stuck in the city can find solace at The Public House, where for $10 you get unlimited soda, juice, and water! (But let's be serious: most people will be getting unlimited alcoholic drinks for $40).

Ohio State: Buckeyes can feel like they're back home at Tonic Times Square or The Village Pourhouse, but other Buckeye friendly bars in the city inlcude Manny's on Second (formerly Blondies) and BB&R.

Oklahoma: The Overlook is the place for Sooners fans. And, by the way, what is a Sooner? Anyone?

Penn State: Nittany Lions can gather at Tonic East or Mercury Bar West this year. Food and drink specials at both.

Rutgers: If New Jersey is just too far for you to go cheer on the Scarlet Knights, go to Public House. Also, check out the tailgate party/season kickoff at Brother Jimmy's on September 11th.

South Carolina: "Van Diemens on 28th and Third is nothing but South Carolina fans on any given Saturday"--via a commenter.

Syracuse: Syracuse can rally at Professor Thom's and hope for a good season for the Syracuse Orange.

Texas: New York Texas Exes can either go to Stout,  or new this year, The Village Pourhouse on 46th Street between 8th and 9th on Game Days. 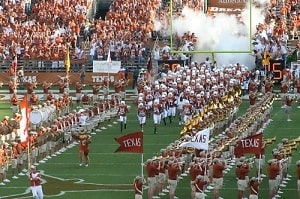 (Hill Country is still hosting Game Days, but adding a 20% gratuity to ALL tabs during games, so we suggest one of the other two options.) Hook 'em Horns!

Texas A&M: Calico Jack's Cantina is once again going to be Aggie Central. Wear Maroon and get free A&M stuff.

Tennessee: UT fans should head to Traffic NYC, on 2nd between 52nd and 53rd, which is apparently always packed with Orange and White.

UCLA: Bruins Fans in New York can curse USC at Vertigo on 3rd Ave, which is donating a portion of the profits to the UCLA Club of New York's scholarship fund.

USC: Galway Hooker is once more the place for big apple Trojans.

Virginia Tech:Manhattan Hokies can cheer their team to victory at The Village Pourhouse on 3rd ave.

Wisconsin: Are you a Big Apple Badger? Head over to Mad River on 3rd and 82nd.There will be a complimentary limited supple of Babcock Hall ice cream, straight from Wisconsin.

Did we miss your school? Do you know something we don't? Let us know and we'll add it in!