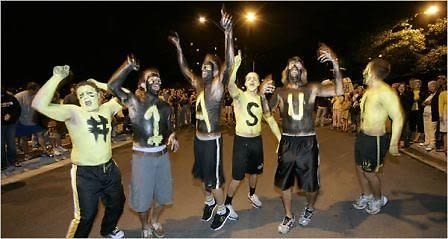 1. Tailgating -This is the traditional sport of drinking and eating shitty food that is often the reason many even choose to venture out to their crowded stadiums of choice.  We have seen tailgates at various other sports (such as the popular Polo matches here), but everything pales in comparison to the College Football tailgates.  Perhaps it's because the experts of boozing (college students) are the ones leading the festivities, or the fact that it may be 10:00 am and you are found doing a keg stand in the middle of a parking lot; whatever the reason, this is the best excuse to get caught acting like a bafoon without feeling abnormal.

2. It's ours.- American football, especially college football, is all ours.  We love soccer which is actually of course football to everyone else, (including most New Yorkers), but our college football here is so inately American it just feels good.  Similar to baseball but with more action and better parties, this is our national sport.

3. Pants- Have you seen them? Forget what's hot in men's couture this fall, the outfits on these players defintely deliver.  (The cheerleaders are pretty cute too!)

3. It's Fun to watch and Unpredictable- True, maybe the games are so fun because of the tailgating that goes on beforehand, or all of the activities going on inside the stadium, but nonetheless, there's no denying that going to a college football game is a guaranteed BLAST.  Also, unlike professional football (which didn't come around until the 1950s), college football is fast and unpredictable.  Take this weekend's win by the Appalachian State Mountaineers (fans pictured above) over the University of Michigan.  The Division I-AA beat the ranked I-A Wolverines in the second biggest upset in college football history.

If this weekend is any indication of what's to come this fall, we are in for an exciting season.