"Wow what a crowd!...how do we get a beer around here."-Stephanie Wei

I'm currently in Seattle, Washington (more specifically, Bellevue, which is right outside the city) visiting my parents. I grew up and lived in Bellevue until I fled east to Yale for college and subsequently moved to NYC upon graduating. Basically, I haven't been around much for the past seven years.

I'd almost forgotten how great Seattle is in the months of July and August. However, I do always argue that there's nowhere else better to be in the continental U.S. during July and August than Seattle. I stand by that statement, particularly after this current trip. I also believe that Seattle may be the country's best kept secret...but I digress. 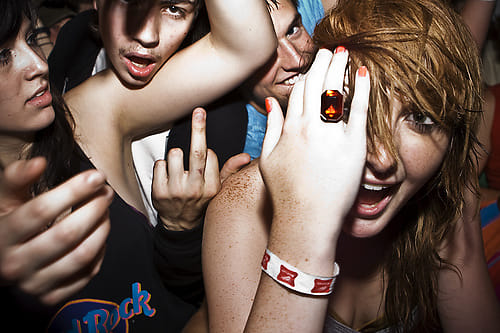 When the weather gets nice, everyone is SO excited for these few months that there are nonstop summer festivals and parties. To name a few, there's Seafair, Bite of Seattle and Bumbershoot. The latest addition to Seattle's summer party sweepstakes is Capitol Hill's Block Party, an annual music festival showcasing the best indie and underground rock in the US, with a special focus on Northwest artists.

So, when my friends invited me to the Block Party, I couldn't resist checking it out, especially since it was in Capitol Hill, known to be one of Seattle's more bohemian neighborhoods. I was also excited to see that Girl Talk and Chromeo were on the lineup of bands playing. On Friday evening, I ventured out to see what the block party was all about and hoping to see a good band or two play.

I'd forgotten how well the citizens of Seattle know how to let their hair down, play and listen to great music, eat greasy food and drink a ton of cheap beer. I'm not sure how to describe it other than utter mayhem (in a positive way, obvs). I made it in time to see Girl Talk play on the outdoor main stage and somehow managed not to get trampled.

I LOVED the spirit and the energy that was "confined" to the fenced-in blocks of the block party. I was both surprised and impressed with the lack of security and police presence while the music continued to rock and the chaos ensued. I didn't notice any signs of serious violence either. Shocking. However, I was in Seattle and we ARE known for being more relaxed and "chill."

I tried to imagine something similar taking place in NYC, but it just wouldn't do it justice. Hats off to this year's CHBP and I can't wait for next year!

Go HERE for more photos from the Block Party.