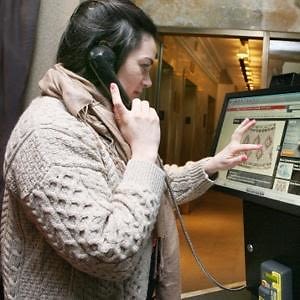 Pay phones are a thing of the past, and as New Yorkers become less and less likely to pull out a quarter to make a phone call, the city is responding by replacing all pay phones with a new computer-kiosk smart phone system called MIKE.

MIKE, an acronym for My Internet Kiosk Everywhere, is a 22-inch touch screen where users can use cash or credit to pay for phone calls, as well as internet and email access. If your phone or iPad is running low on battery, MIKE also doubles as a charging station.

The company behind MIKE, Pacific Telemanagement Services [PTS], will soon begin replacing the pay phones in Penn Station, then in schools and hospitals. A 15-minute phone call will cost 50 cents and four minutes on the Internet will cost $1.

"CEO Thomas Keane detailed PTS's mission, "People tend to forget about pay phones, until their cellphone doesn't get a signal, until there's a natural disaster. We want to make sure there's a future with pay phones where Americans need them."

NYC is stepping into the future with MIKE, and even if many of us can't see ourselves using an updated version of the pay phone, having phone charging stations around the city will definitely be a savior for those mornings when your battery is running low.