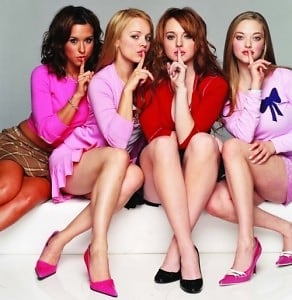 . . . or so the Wall Street Journal discovered. Their reporter set off to find out where the cool kids were hanging out, and got sassed real bad.

Anyone who's ever had to interact with teens knows that they can turn vicious in an instant. The key is to steer clear of their turf, and seek to meet them on neutral ground. Ralph Gardner, the WSJ journalist, did not do this. Instead (hapless man!), he went hunting for urban private school students on Central Park's Great Lawn, which NOW BELONGS TO THE KIDS AND THEIR DRUG HABITS. That's right. Adolescents have taken over the Great Lawn from the tourists, pregnant ladies, and frisbee players of yesteryear. The kids are skulking near the high grass of the softball outfields, drinking 40s, and getting clandestine frozen margaritas from park vendors, the WSJ reports. 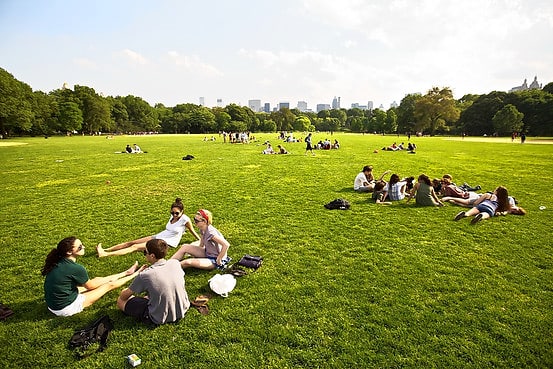 The teen-infested Great Lawn. This is as close-up as the photographer apparently got.

[Photo courtesy of the WSJ]

Gardner traces this trend to 1995, when the Great Lawn was reseeded and became, once again, a verdant cradle for "social climbing." (What? Really? Does no one own a fake id and a map of the hottest speakeasies these days? Are we really so old and clueless?) "Indeed, hanging out on the Great Lawn has virtually become a rite of passage," writes Gardner gravely. Apparently, everything kids do these days is a rite of passage. The WSJ has good company in such labeling - recall how the Times likes to stage-whisper "Treeeennnnnd" whenever it sees a potbelly or a bathtub full of fireworks. 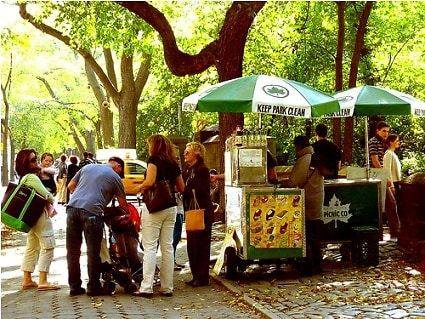 Now that we know these guys might have booze, we are going to be way happier to see them.

Yeah, we're ancient by now, but we can think of cooler places for teens to hang out than Central Park: The tunnels under the city. Underground clubs. The kids' stepfathers' smoking lounges. The pools in their luxury apartment complexes. And so on. And so forth.

Finally, our intrepid reporter decides that the cool kids are the ones circulating on the Great Lawn. "If you're lame," a recent high school grad tells him, "you sit in one spot." Why doesn't our hero have more quotes from current high schoolers? Because many of them will not talk to him! Because they are mean! They won't let their names be used! They give the WSJ photographer "a hard time, demanding he delete any photographs of them." Then they ask if he knows who their parents are. That reaction, at least, sounds like the teenagers we remember.