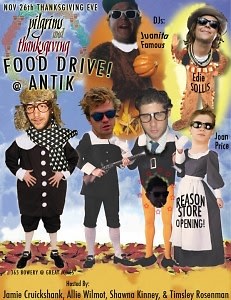 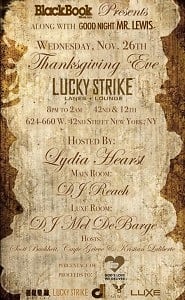 The Thanksgiving Pre-Parties have been flooding in our email.  While you can always check our calendar for the up to the minute scoop on where we will be, I thought I would go over some of the more prominent parties that I won't be missing. Above, the Food Drive at ANTIK, hosted by James Cruickshank, Allie Wilmot, Shwana Kinney, and Timsley Rosenman will follow the Reason Cooper Square opening and is sure to be a hit.  Also, the Lucky Strike Party hosted by Lydia Hearst, Scott Buccheit, Kristian Laliberte, and Cayte Grieve.  This is the party I will be at, and it's bound to turn up loads of familiar faces.  To read what Kristian and Cayte have to say about the event, as well as other invites, click below: 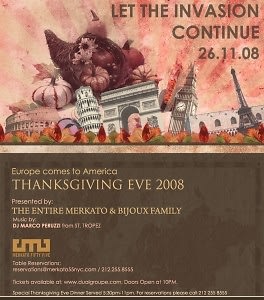 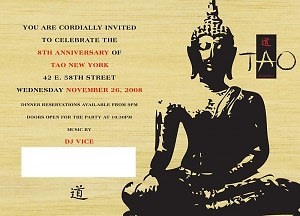 There's also the "Europe come to America" Thanksgiving party at Merkato 55 and the TAO 8th anniversary party (INVITE ONLY) at Tao.  For all of our other Thanksgiving parties, check out the calendar!  Now here's what Cayte Grieve and Kristian Laliberte have to say about the Lucky Strike party that they are hosting:

Cayte Grieve: This year I will be without the comfort of home and family, and all of the traditions that accompany the 'idea' of Thanksgiving. For me, that idea has changed, as I am able to be thankful for what I have in my life, and am able to really look to the meaning of giving during the holiday season- which is why I decided to host Thanksgiving Eve along with Kristian, Scott, and Lydia.

God's Love We Deliver is a great charity, focusing on preparing nutritious meals for those who are too sick to do so on their own. For just a simple donation of $35 for entrance into the Luxe Room at Lucky Strike, which includes an open bar, God's Love We Deliver will be able to do just that. As a daughter of a cancer survivor, this work hits close to home, and I know how much it will mean to the families in need. On Thanksgiving day, when I'll no doubt be burning my first turkey, I'll be happy to know that we helped to set a table for someone who did not have the means to do so for themselves.

This is the very first time I've hosted an event, and I'm honored to do so in good company, and for a great reason. I hope that everyone will be motivated to come, first for the amazing opportunity to give, and second for the fun times to be had. Lucky Strike is the perfect setting for Thanksgiving Eve, with the option to relax in the Luxe room. Please join Scott, Kristian, Lydia and I on Wednesday – Thanksgiving Eve!

Kristian Laliberte: I have never heard of Thanksgiving Eve before last month. Strictly speaking it is simply the night before Thanksgiving, a very American holiday whose origins are still somewhat mystical. My family has never celebrated Thanksgiving (neither Canadian or America) in any traditional way--we aren't economic vegetarians, or Native American activists (although considering the actual events that proceeded Plymouth Plantation, the whole concept is just a little, uh, offputting), or even anti-football (well I only like it cuz I can pretend to be watching the game when I'm really watching Tom Brady's ass). Instead, we took the time off school and work to go abroad and spend time together as a family before the crazy days of Christmas--where my mom goes crazy decorating our house like Martha Stewart on 1980's style cocaine.

This year, however, I was asked to help host a party on the night before Thanksgiving to help benefit God's Love we Deliver (can u make this a hyperlink to the site). Originally, I had planned to spend the week in Shanghai with my fiancee, but due to my deadly struggle with pneumonia that lasted a good three weeks, I have a lot of work to catch up on. So, in the spirit of NYE, we have decided to make an event of it but unlike NYE we aren't just drinking to get drunk (though that's a nice side benefit), but really to raise money--like Cayte, I am the son of a cancer survivor, and this charity truly does God's work.

Before you cue to the anticipated Gawker attacks on the bowling lane locale--well it's actually nicer than most lounges, and bowling shoes aren't required. So everyone who is in New York without family, please consider being our family on the 24th...