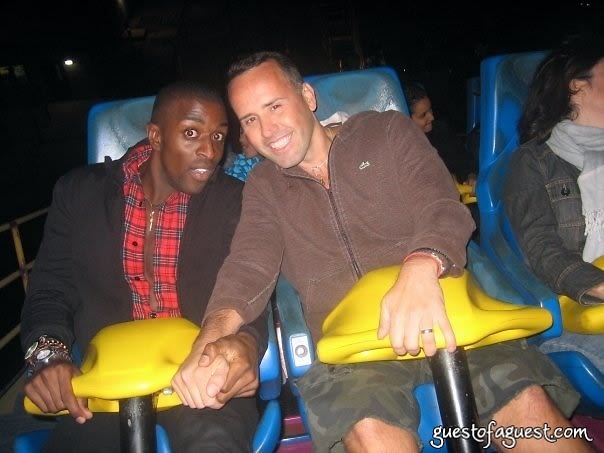 Friday September 9th marked the 5th Anniversary of Fairgrounds Out at Night at Six Flags Great Adventures in New Jersey.  Essentially the park closes down and holds a gay pride event. The event is welcome to anybody who buys a ticket and the proceeds go to Heritage of Pride.  Heritage of pride is a not for profit organization that commemorate and celebrates the Stonewall riots.

Naeem and I have yet to miss one, and this year was not going to be the first.  So we, along with some friends, gay and straight, made the hour journey into the wilds of New Jersey.  We are roller coaster fanatics so this is a great way to get our fix.  The roller coasters at Six Flags typically have over an hour and a half wait.  On this night, the most anyone waits is half an hour.

It was a really chilly evening so instead of the normal tank tops and half shirts, everyone was bundled in sweatshirts and jackets.    We rode every ride except for Kingdom Ka, which as is typical, was not working.  We would see it running and then hustle our way over there just to find out that it broke down again( something about the hydraulics ).  In addition to the rides there are also performances and even a dance floor with rotating DJs.  We hear DJs every night so we never bothered to check it out.  It would only take time away from our roller coaster riding!

Oh and the reason there are so few pictures?  On the last ride of the night, on the phenomenal El Toro, on the first big hill, our camera popped out of my pocket.  I did not even realize it until the end of the ride when our friend Suzanne said, something whizzed right by her face!  Although we were upset about losing the camera with pictures from the night, we were happy that nobody was hurt!