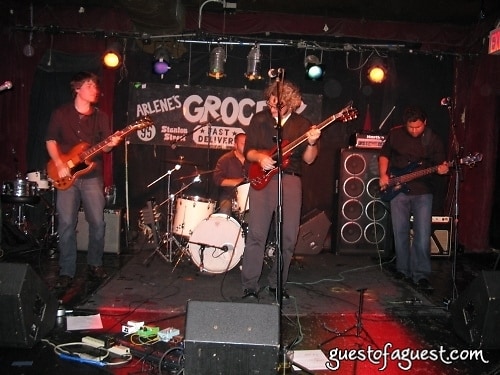 Go HERE for more photos from the show!

Last night, Northern Public played their debut show at Arlene's Grocery and the reviews were positive.  The band, made up of members Dan Menz-Erb (guitar and vocals), Nick Confessore (guitar), Chris Paul (drums), and Gautam Peri (bass) have been practicing every Sunday night, and it showed.  We were impressed.  So were the other guests that filled the venue (at 7:00pm no less) including media folk like Nick Denton, Jessica Coen, Jesse Oxfeld, Chris Rovzar, and loads of others including the entire GofG team.  A couple of weeks ago I sat down with Nick to get the scoop on his band.  Here's how the exchange went:

Me: "COOL. What does Northern Public stand for?"

Nick: "What do YOU think it stands for?" (smiling mischeviously)

So take it to mean what you will....the possibilites are endless, as is their potential.