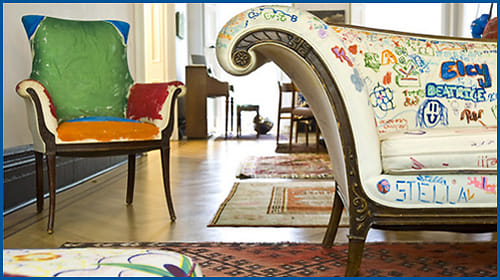 [Photo via Asimko via NYTimes]

The following story reminding me so much of the activity I took part in this past Saturday at Kelly Bensimon's daughter's birthday party in East Hampton.  There, I witnessed a dozen kids in their brightest whites having so much fun demolishing them with paint at the Jackson Pollack-themed affair:

Pamela Bell (a founding partner for Kate Spade) decided to redecorate her house. She encouraged her daughter to invite over her seventh-grade classmates and then granted them permission to cover the muslin-covered John Derian furniture with marker and paint…

"Life isn’t perfect, and you can make yourself crazy chasing an antilogy"

Said Bell after living with her three children and husband (from whom she is now divorced) in a temple to architectural perfection, a trophy penthouse apartment designed by Rogers Marvel Architects above a former music hall on East Fifth Street. [NY TImes]