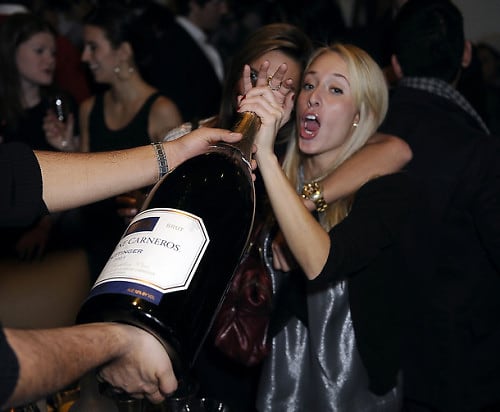 It's not unusual to see corked bottles of rosé popped midday in the French Riviera during summertime or in New York for that matter.  But Seeing dozens and dozens popped in New York during December in freezing cold temperatures is sure to raise a few eyebrows.  And then of course if you add Jeroboams and Methuselahs of champagne into the mix (ushered to tables with an entourage of sparklers), you have a true anomaly.  Or a kickin' party. 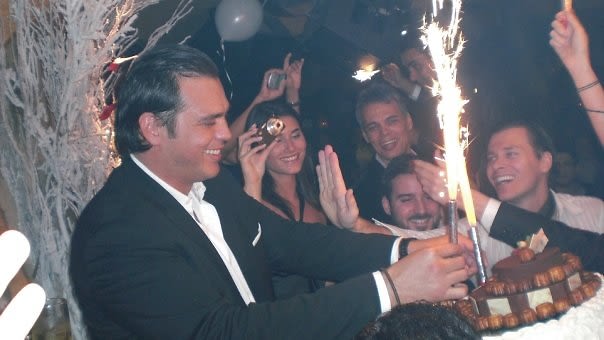 Aymeric Clemente of Bagatelle knows how to draw the top crowd

The so-called "Saturday brunch" has been making Saturdays the new Sundays (at least as far as brunch is concerned), and Merkato 55 and Bagatelle Bistro have been leading the charge as of late.  Make no mistake, these are not your typical sitdown affairs, but rather a rosé-fueled party that has people dancing on tables, twirling napkins, waving sparklers, and charging glasses to the brim that pulsate with the reverberations of house music.   The best part for party-goers is that they are both within a few blocks of each other.  The worst part is that they are in the meatpacking district, an obstacle, however, that these guys more than overcome...

Bagatelle is headed up by Aymeric Clemente, NYC Frenchman and longtime maître d' of the Upper East side euro hotspot Le Bilboquet (that saw it's fair share of napkin twirling in its day).  Merkato 55 is the brainchild of twins Daniel Koch and Derek Koch, who interestingly worked with Clemente at Le Bilboquet several years back.  Conveniently, both places are also located above a club in case the party needs to be extended (Merkato 55 is above Bijoux, and Bagatelle is above Rendevouz and is adjacent to Kiss and Fly).

After moving in their own directions, the twins and Clemente have ended up as neighbors, both having set up shop within several blocks of each other in the Meatpacking district, albeit 63 blocks lower than before.  This past Saturday seemed to be culmination of both spots efforts during the fall of '08 to be the Saturday brunch king.  Merkato which started out on the ground floor of its space, has since overtaken two floors and has nearly doubled in capacity.  This past Saturday, Bagatelle hosted renowned St. Tropez DJ Jack E, who spun for a party that was sold out days in advance.

Both places indeed seem to be thriving, in fact fueling each others success, often having long ques of people waiting in the cold to enter.  We will keep you posted on the ongoings of the Koch brothers and Clemente in the New Year and follow wherever the party may go!