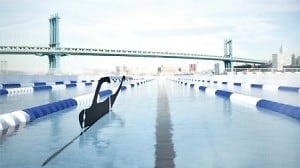 Unless you're a member at Soho House, immune to what lurks in the Gowanus canal, or don't mind diving into a Brooklyn dumpster filled with questionable water, finding a pool in New York can be tough.  But it could get a lot easier with the help of Kickstarter.  + Pool, a public swimming pool which would float in the East River between Brooklyn and Manhattan, has reached their first goal!

Designed by two NYC-based firms -- Archie Lee Coates IV and Jeffrey Franklin from Playlab and Dong-Ping Wong from Family -- "it filters river water through the pool's walls - like a giant strainer dropped into the river," removing bacteria, contaminants and odors. The resulting water would be safe enough to stand up to city, state and federal standards.

Shaped like a giant cross, it can be segmented into four pools: Children's Pool, Sports Pool, Lap Pool and Lounge Pool. The group set out to raise $25,000 to  build the first layer of the filtration system and test it. They've managed to raise $26,597 in just six days! 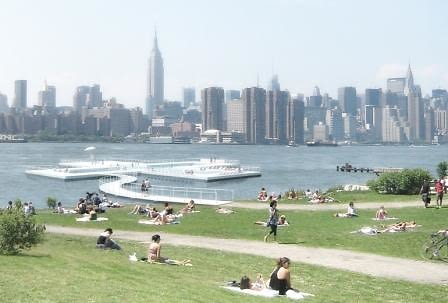 With any luck and a lot of cash the pool could be in place by 2012. Until then, there are still plenty of places to sunbathe:

[Where To Sunbathe In New York]