This is their tag line, here is the low down:

It's rainy and cloudy here but we have icecream and scooters on our minds, and we think that 5 boroughs icecream company is really sweet (no pun intended).  Here's why: 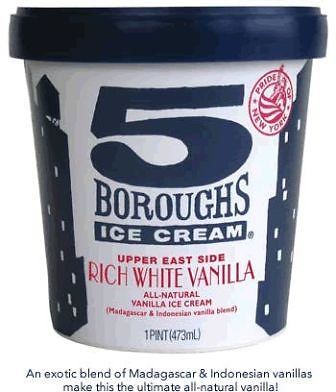 Their Story: "5 Boroughs Ice Cream began on our couch in Astoria, Queens. First as a hobby—then an obsession! We thought, “what if there was an ice cream flavor for every neighborhood in the city?” Inspired by the different neighborhoods and the people who live in them, we saw NYC as an inexhaustible source of flavors to create."

Staten Island: Landfill=This is almost our favorite.  "This flavor has everything but the kitchen sink"....hilarious!  And though it has had it's fair share of controversy, (Borough President calls for ice cream boycott), we think it's just good plain humor.  For those wondering, it's a vanilla icecream with bordeaux cherries, chocolate crunchies, brownie chunks and "serious fudge swirls"....sounds as if this will leave a sweeter taste in your mouth than the borough it's named after does.

Upper East Side: "Rich White Vanilla"= This is the winner of our favorite.  An exotic blend of Madagascar and Indonesian vanillas, the name is a perfect fit for both the icecream and the UES inhibitants.