We now know where we will be spending many of our afternoons this fall: 380 Broome St.  That is where the famous Papabubble is set to open (via their website).  For those of you that are unfamiliar with this candy from the gods, the store originally opened in Barcelona and has  spread to Tokyo and Amsterdam.  We had the opportunity to taste it in Barcelona last summer and excited would be an understatement in describing how we feel about these guys opening in Soho October 18th. 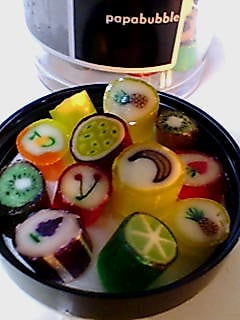 Right now, the only place in NYC you can get the stuff is at Dean and Deluca, and it's a limited selection, therefore, we would have been happy to travel way above even 23rd street for this stuff, however, we are happy to know that we can stay downtown.  So, though everyone's been talking about this for quite sometime, we wonder if they know that the founders (Christopher King and Nigel Chouri) are actually Australian (from Melbourne), and that they routinely give away free samples...god we love what those Aussies are doing for our city.  Well let's hope that whoever they hired to open their New York branch will do as sweet of job as they have.