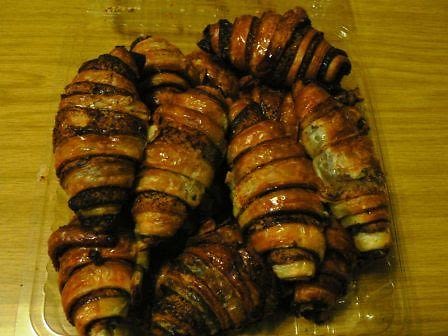 Happy New Year to all our Jewish readers!  I am not Jewish....I am midwestern. (Yes, I realize there ARE some Jewish people in the midwest, I had just never met them).  I missed out on the Torah readings in my "Bush-inspired" catechism classes.  Which means I really didn't have a clue about any of this until I moved to NY (and, coincidentally befriended a holocaust surviver in my first week here).  It also meant I was pretty much the only one at the office yesterday.  (My consolation prize was "jeans day").  That being said, I have several Jewish friends, and some that were kind enough to include me in their Rosh Hashanah dinner celebration last night, so as not to have me feeling completely left out.  Now, there was no confetti, noise makers, or champagne around to ring in the new year, but if being Jewish means you get to eat like we did, I have been seriously missing out.

Here's my new plan, which my boss, himself Jewish thinks would be hilarious.  I go to the Rabbi saying that I would like to convert to Judaism.  After going through the explanation of the seriousness of this request of mine he will ask me the reason I wish to be Jewish.  I will reply: "for the rugelach, kugel, and teiglach".  I'm sorry if this offends anyone out there, but that shit is just so good.