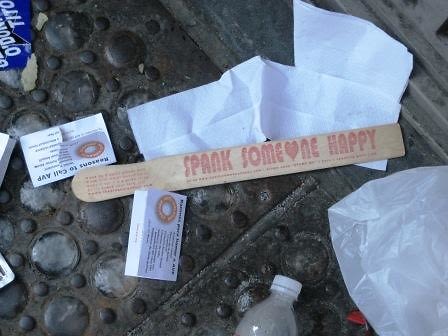 These sticks are just a sampling of the hundreds of free surprises handed out at the Gay Pride Parade this last Sunday. While we were not planning on watching, (the night before at the Box took care of our absurdity and unrestrained fun needs for the week), we just couldn't get around this parade...it lasted over 5 hours down the street outside our apartment.

We really wanted to see "The Waitress" and that meant crossing 5th ave, there was no way around this. So we snapped some pics. Again, we were planning on only taking a couple, the noise being emitted from this affair was not helping our hangover one bit, however, once we started watching, we couldn't help staying. With each passing float, each new spectator screaming from above, and every tranny getting better looking than the next, we ended up staying for an hour and would have even longer had it not been ending. 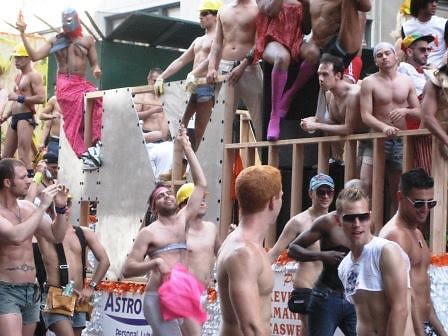 This was a hot dude babe...we would kill for her legs: 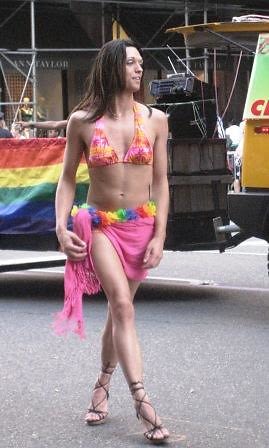 The best thing about this parade? It was led by RELIGIOUS GROUPS! Leave it to the gays to be the ones to unite the Christians, Jews, and Buddhists.

"We stand for a progressive religious voice," said Rabbi Sharon Kleinbaum of New York City's Congregation Beth Simchat Torah. "Those who use religion to advocate an anti-gay agenda I believe are blaspheming God's name." Kleinbaum, who heads the world's largest predominantly gay synagogue, and the Rev. Troy Perry, founder of the Metropolitan Community Church, were the parade's grand marshals Sunday, waving from his-and-hers convertibles.

We are not gay and we only have a few friends we know that are, but we are so glad they are helping make the world loosen up a bit and realize that age, race, gender, sexuality, nationality, etc. etc. etc. all make up one human-ality. 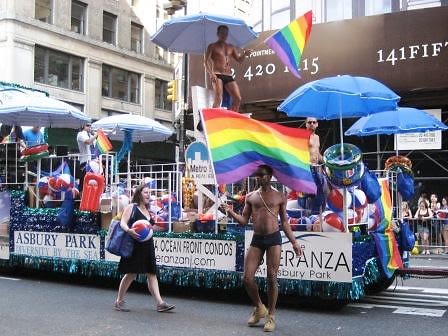