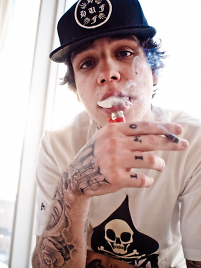 It's easy to be jealous of the spawn of wealthy, celebrity parents simply for being born into the lap of luxury. Disliking  them purely for the opportunities afforded by their last name is harder, unless, like Rich Hilfiger, they practically beg you to. The newbie rapper and son of Tommy Hilfiger has a message for you in his profile by the Observer: suck his dick.

Who Is Rich Hil?

Covered in tattoos and newly signed to Warner Music through a friend The Weeknd, Rich Hil (his rapping name) exhibits the worst rich kid quality: complete lack of humility.  Strolling up in his Rolex, hanging with the reporter at his place at the Plaza, namedropping Stephanie Seymour in the first five seconds, destroying studios by drawing obscene images on the walls and peeing in cups, getting arrested for marijuana, and throwing pieces of his fruit plate off a roof at people are all pretty terrible behaviors, with perhaps the pop-psychology take that this is an out-of-control, spoiled wild child who never needs to take accountability for his actions. But none of this is that bad compared to some of the things that come out of his mouth.

The Wisdom Of Rich Hil

The profile is packed with rare gems, but a few of the better ones:

“Yeah, I learned that alcohol and coke? Is kind of for faggots. You know, like, in my eyes. I’ll drink alcohol to get a lean, don’t get me wrong, but, like, something about the people who are addicted to alcohol and cocaine, they seemed like fags to me,” he said. “Not ‘fags’ as in ‘gay.’ I have nothing against gay people. Mad people in my family are gay.”

Fuck y’all, like, suck my dick. Literally. They know who they are.”

"I’ve already reached all my old goals,” he said shortly after she left the room. “I was like, ‘Yo, I want to be the best rapper that was born in Connecticut ever.’ I’m that! No less than that, you can’t even front.” 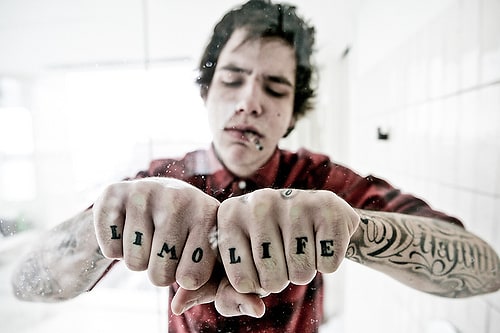 Fingers crossed for a Rich Hil vs Chet Haze, Tom Hanks' rapping son, battle. At any rate, Rich is more interesting than some celeb kids who just dress nice, go to polo matches, and eat at fancy places.

For the rest of the Observer article go HERE.