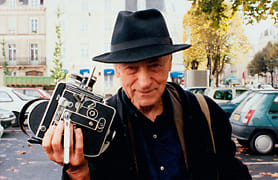 The very commercial Shrek: Forever After opened the Tribeca Film Festival. But programmers didn't forget scrappier movies, including several about the artsy downtown scene. Visionaries, featuring Andy Warhol, Norman Mailer, David Lynch and a slew of other notables, is a documentary about NYC avant-garde cinema that proves TFF is still in touch with its roots.

There was a moment of disconnect when the lights dimmed, as a string of ads for Festival sponsors Stolichnaya, Heineken and American Express jarred with the defiantly non-corporate subject of the movie. But I guess a Festival's gotta eat, so to speak, so all was forgiven as the main event got underway.

Chuck Workman's Visionaries covers the history of non-narrative film, from its inception during the Surrealist movement in the '20s to its huge boom in popularity during the counterculture '60s. But it focuses mostly on Jonas Mekas, widely considered the godfather of American experimental film, even though he dismissed the "experimental" label as "useless, meaningless and confusing" in a post-screening Q&A. 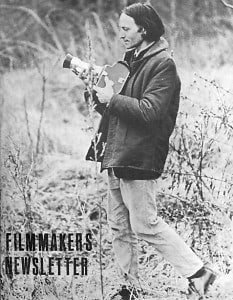 Mekas, who emigrated from Lithuania during World War II and lived in Williamsburg--the original hipster maybe, although he'd surely loathe that label too-- was a mentor to fringe directors famous (Mailer, Lynch and Warhol, whose Sleep, a six-hour movie showing nothing but a man asleep, Mekas helped get into theaters) and obscure to most non-indie nerds (Jack Smith, Maya Deren, Peter Kubelka, Kenneth Anger).

He also has an impressive resume himself, including Bed-In, a take on John Lennon and Yoko Ono's famous sleepyheaded Vietnam protests.

Robert Downey Sr., described as the "Lenny Bruce of American cinema" was at the show. Downey is the rare bleeding edge artist who refuses to take himself at all seriously, and the clips of his movies in Visionaries provide some much-needed humor, even though Downey said he "dreaded" revisiting earlier material. His famous son Robert Downey Jr. appeared in a featured scene from Pound, a film about a dog pound in which the canines are played by humans. Festival attendees take note: this might be your only chance to see a grown man sniff a 5-year old Robert Downey Jr.'s ass.

As Downey put it, "maybe this is why he had so many problems."

Aside from the great collection of snippets, Visionaries lauds Mekas' efforts in establishing and maintaining the Anthology Film Archives, the East Village's great "Cathedral of Cinema." Lola Schnabel and other young folks say that experimental films are gaining traction with young audiences, possibly thanks to YouTube and other democratizing artistic channels on the internet. (Mekas says "YouTube is great!" for the record.)

So I'm not sure what Workman's point was when, Jay-Walking style, he asked a bunch of 20somethings lined up outside of Anthology if they knew who Mekas (or Stan Brakhage or even Fellini!) was. Most did not, which is either a sign that they're idiots or, more optimistically, willing to dive into avant-garde cinema despite falling outside its traditional snooty demographic. Either way, it's a good thing they're lining up.

The pitfall of making a documentary about great, canonical and inventive film is that any comprehensive review will seem dry compared to its subject. And I wish Workman had dug deeper at some points. For example, why did rebel cinema, including Smith's groundbreaking drag queen opus Flaming Creatures, flourish in the seemingly staid '50s?

But the treasure trove of classic movies and compelling interviews in Visionaries makes it an essential and never boring educational piece for movie lovers and a perfect way for green Anthology visitors to prep for their next pop quiz.