The other day I was at home getting some work done. The desk in my "office" faces so that when seated you're exposed to a serene view through the windows. Today, however, such a view was not to be had as it was obstructed by my neighbor's ass.

Curious movements on the terrace across the street caught my attention around noon. It looked as if someone were exercising on a mini stair master (something you'd see at Sharper Image), or giving a shiatsu massage while wearing nothing but a backbrace. I found it to be an unusual sight, then again, who wouldn't like to be nude on their balcony on such a beautiful day? About an hour later I noticed he was still there, and was now gardening.

Click below for a back side shot that is NOT pretty: 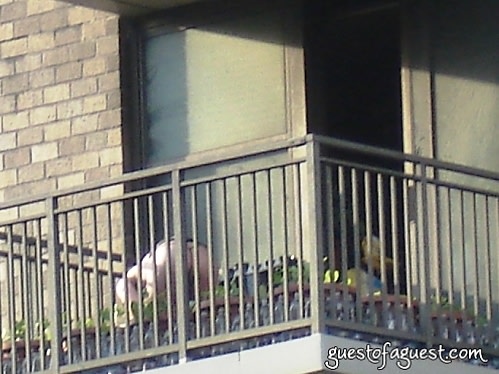 I'm a big fan of living in such a liberated state and was not offended in the slightest bit, but this guy is an exhibitionist on a level never witnessed before by my eyes. Very bold. Also, unbeknownst to the bare horticulturist, there was a little boy, also oblivious, playing on the deck directly above him.

All I wanted was to politely communicate the following message with the vocal amplification of a blow horn: "Dude-yeah you-naked gardener-put some clothes on! You're killing me over here, I'm trying to work!" The distraction proved to be too strong for my work ethic; I had to get out of my apartment or else I would have stared in astonishment until the sun went down, or until he dressed. Upon returning around 5PM I discovered the scenery outside my apartment remained unchanged. Until 8 or 9 he continued to toil in his little pots of vegetation, cultivating fresh herbs-like basil and oregano, tomatoes, little teeny peppers, or so I'm guessing.

I'm still confused by this occurrence, I need answers! What kind of sunscreen does he use? Will there be a repeat performance next week? How did he hurt his back? What is his motivation? Is he oblivious to the fact that everyone can see him? What is he growing? If I see him next week I'll try to get his attention. Who knows, maybe I'll be invited over to sample some of the…fruits of his labor…