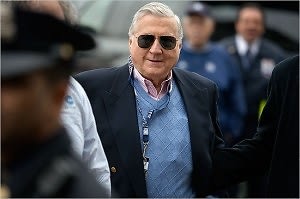 Under the watchful gaze of George Steinbrenner, the Yankees rose from from depths of the Major League to become a legendary team with 7 World Championship titles under its belt. He transformed a struggling team into a world-renowned franchise, no easy feat.

Despite his failing health in the past few years, his aura of authority did not fade with the years. Equal parts tough, impressive, and controversial, he was a formidable man known by the moniker "The Boss",  who wielded an enormous amount of clout in the athletic world.

In addition to being somewhat of a sports god, Steinbrenner was a well-known celebrity and NY social figure. Seinfeld fans would remember his humorous caricature, all arms and loud voice (none other than Larry David). He embraced NY, and was involved in numerous charities and fundraisers. In 2004, he told Sports Illustrated: I care about New York dearly. I like every cab driver, every guy that stops the car and honks, every truck driver. I feed on that.”

It's no secret that he wasn't a man to mince words, but more importantly, he was a man of his word. He set out to guide the Yankees to glory and success, and this is exactly what he did.

To see Steinbrenner immortalized in Seinfeld...

[Photos by Robert Caplin for NYT]