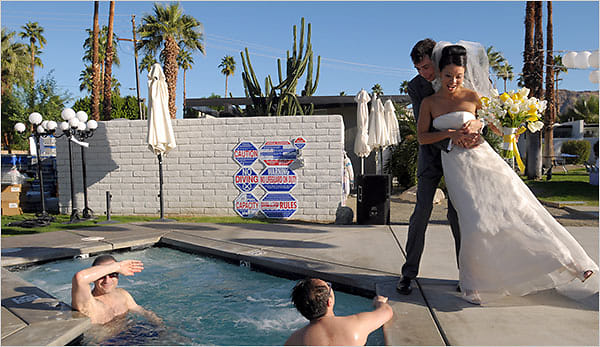 Lately, it seems like everyone is tying the knot.  Misery loves company, and in this economy, if you aren't splitting up, you're getting married.  Today, we would like to introduce our newest feature: "The Wedding Party" where each week, we will look through some of our city's weddings.  So, if you know of a wedding you think is worthy of covering, send us a line.  We are ready to send our gofg photographers to capture the fun!

Karin Fong and Ansel Schütte (photo above). Married on November 8th in Palm Springs, California, these two were the feature in Sunday's NY Times Wedding Section.  The couple both manage "Imaginary Forces", which Karin founded and is a production and design company.

Fun Fact: Mr. S was engaged before and his own parents are divorced.  He claims that he was leery of marriage until "finding someone I really loved changed my ideas."

Charles Burleigh and Lithgow Osborne I: Married Friday on Martha's Vineyard at the home of Christopher Cohen and Sharon Radcliffe.  Chalres is the director of interior design at Allan Greenberg Interiors and Lithgow is the manager of Malmaison Antiques, both in NYC.

Stacey Wexler and Kevin Kotler: Married Wednesday at the NYC Municipal Building.Kevin owns Broadfin Capital in NYC and graduated from Penn. Stacey is the VP for theBalm (cosmetic company). The couple will be having a Jewish ceremony on Dec. 5th in Old Road Village in Antigua, West Indies.

Helene Steel and Howard Schlosser Jr: Married Saturday at their home in Brooklyn.  Helene is an associate broker at the Corcoran group in Manhattan and graduated from Boston College.  Howard owns Castlekey and graduated from Old Dominion Univiersity.  This is the second marriage for them both.

Fun Fact: The two were high school sweethearts who reconnected on the internet 40 years after they first dated!  Oh the wonderous glory of technology.