After spending $55 million on a three-day royal wedding, which included fireworks (!!!!), Prince Albert of Monaco and his new bride, Charlene Wittstock's honeymoon has turned from potential fairytale to royal nightmare.

It's not really that shocking. Rumors surfaced just days before the wedding that Wittstock had gone Runaway Bride and tried to flee Monaco back to South Africa over Prince Albert's two "confirmed" illegitimate children, and rumors of a third love child.

The guy, despite his looks, was a known Playboy before all this, dating Brooke Shields, Gwyneth Paltrow, Claudia Schiffer and Naomi Campbell. He also has 6-year-old son named Alexandre with a former flight attendant, and a 19-year-old daughter, Jazmin, with a U.S. real estate agent.

But Charlene stuck with him for five years and yes, she may have tried to escape, but she still said "I do." She could have held up a sign for the millions to see, to be captured on broadcast, "HELP ME!" during the ceremony, instead of crying throughout the affair, an emotion which could be construed as happy.  She could have even written SOS in the frosting on the Paul Bunyan-sized cake. That would have worked. 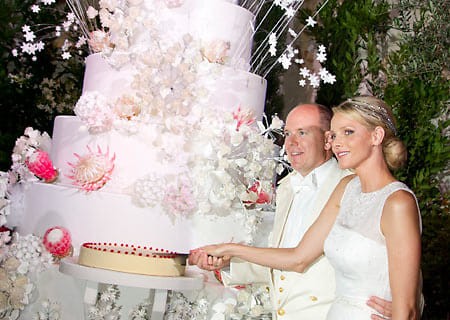 The couple had dated for five years, so maybe she thought finally making the BIG commitment would help Prince Albert keep his pants on. Or at least use a condom?  Maybe she just really loves the guy? Speculate as much as or as little as you want, but she went though with it only to go on what might historically be the worst honeymoon of all time.

Instead of staying in the luxury suite they had planned, the couple stayed in separate hotels 10 miles apart. As in, far enough away that there was no chance of even bumping into each other on a walk or at the grocery store or out doing whatever the royal version of those things is.  A Monaco source said:

"The Prince was in a meeting at the Hilton with members of the International Olympic Committee from July 5 to 9. For practical reasons, it was better to sleep there. '

For their one obligation to meet South African president Jacob Zuma, they reportedly arrived in the same car but left in two separate vehicles.

If you are upset because your husband of less than a week impregnates everything within a 2 foot radius, leaving him alone is probably not a good option. The icing on this rotted wedding cake: they cut the trip short so he can take a DNA test to resolve a multi-million dollar paternity claim over that third love child and....also, now possibly claim a fourth! Who knows what he did for those few days in his hotel room, alone, on his honeymoon. 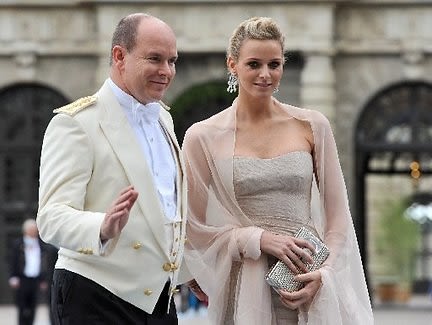 Despite who may come running with bad news in nine months, the couple had a Catholic wedding so divorce might not be an option. One constitutional expert suggested to French magazine VSD that Charlene may have had a ‘pact’ to produce a legitimate heir with her new husband before the couple can go their separate ways.

The Palace has insisted that "the couple had now headed off on a 'secret' honeymoon, away from the inquisitive eyes of the world's media and skeptics."