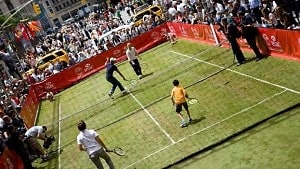 Put World Cup watching aside for a couple of days because Wimbledon 2010 begins today. And although Wimbledon's grass tennis courts are more than 3000 miles away that doesn't mean you can't enjoy the championship to the fullest.

Here are some things you need to know before you immerse yourself in Wimbledon this year:

Before sitting down to watch the matches,  it is critical to know which players to keep an eye out for. Among the men, Rafael Nadal, Andy Roddick, Roger Federer, Novak Djokovic, and LLeyton Hewitt should be on everyone's list to see.

The women to watch out for are Maria Sharapova, Caroline Wozniacki, the Williams sisters, and . All of these players are top seeded (among the top 32 players in the world) and are HOT both on and off the court.

Vanity Fair has a great profile of this year's top WAGS (Wives And Girlfriends). In addition to knowing the players, looking out for Wimbledon's WAGs in the stands is also a highlight of the tennis tournament. Some of the best players have the best looking model and actress wives , like Sports Illustrated model Brooklyn Decker is now sideline spectator for husband Andy Roddick. Other beauties supporting their tennis star beaus and husbands are Jelena Ristic (girlfriend of Novak Dijokovic), Bec Hewitt, and Mirka Federer.

NYC Racquet Sports: Get your raqcuet strung or restrung

Now that some of the background information is covered, next is getting the full Wimbledon experience in the city. All this week(June 21-June 25) HSBC Bank USA and Rockefeller Center are hosting events to transport the tennis championship to New York. Everyday from 7:00am to 5:00pm, live screenings will be shown on a large screen so people are able to watch the games. There will be tennis clinics hosted by Prince Sports Inc and Gotham Tennis Academy everyday June 22 to 25 from noon to 1pm and 5-6pm . 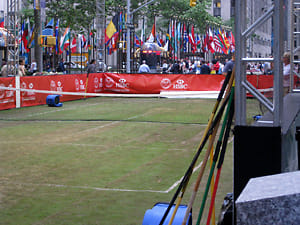 Also public grass courts will be available to play on for those who already have tennis skills or who just want to play on a court like the pros at Wimbledon (call (212) 525-2367 to reserve). You will be able to take pictures with  a virtual Wimbledon Trophy, through the use of Green screen photography. And you can also get your tennis racquet restrung everyday from 12-2pm at NYC Racquet Sports. If athleticism doesn't run through your veins,  you can play Wii Tennis against fans on-site in London.  And if you aren't interested in tennis at all, at least enjoy the classic Wimbledon treat: strawberries and cream (available daily from 12-6pm). To top it all off, all of these events are FREE. So go out in your tennis whites and enjoy what the city is offering for Wimbledon.