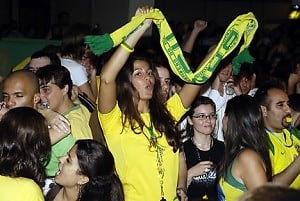 Even if you aren't a die-hard soccer fan, five drinks for 20 bucks, live music, and World Cup banter is worth the trek. Though we started out the afternoon rooting for underdog Ivory Coast, after a couple Caipirinhas (rum rum rum!) on the house we became official fans of the Brazilian futbol team.

According to my Brazilian buddies, Little Brasil has essentially moved to Astoria, Queens, especially in light of the recession and the still over-priced Manhattan lifestyle. And because Favela Grill is not in Manhattan, it's drinks aren't $18 a pop and watered down. Instead, the Brasileiro restaurant offers reasonably priced drinks and authentic, freshly made, food. Though the cozy atmosphere, the two drop down screens, and the full bar are enough for a high-spirited (pun intended) good time, the tambourine weilding patrons and generous - we got free jerseys - staff will honestly make you feel like you are part Brazilian, and just didn't know it until now. 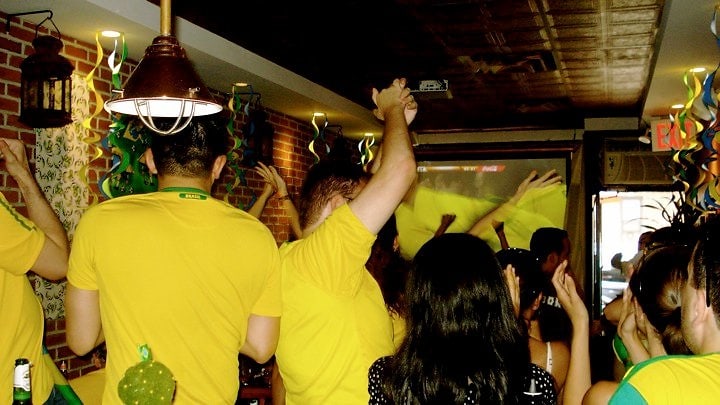 Everyone expected Brazil - who has won the World Cup a record of 5 times - to beat the Ivory Coast, so the fun we had could have been attributed to a rather premature celebration and a couple of beer towers. 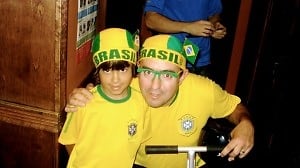 Brazil faces off against playboy Cristiano Ronaldo and Portugal on Friday without it's star player Ricardo Kaka, which is honestly a better, albeit anxiety enducing match up than the Sunday massacre of the Ivory Coast, just don't count on sitting down at Favela Grill since reservations are just about entirely full for a 9:30AM game!!

(Photos via Miguelina Nunez and DailyMail.co.uk)