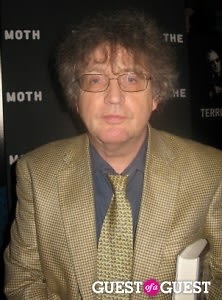 Last night at The Moth Ball at Capitale, poet Paul Muldoon revealed, in a charming Irish brogue,  the secret of his poetic power ...

Our conversation with the New Yorker poetry editor and Princeton professor began as a comedy of errors. A woman walked by and said, "Point me to the bar, like a good Irish woman." Muldoon was holding a copy of Apollo's Angels by by New Republic dance critic Jennifer Homans that he got at a book party. Then New Yorker editor David Remnick walked in and bumped into the book before knocking the cardboard Moth promo off an easel.

"That was my dear friend, Mr. David Remnick there..." Muldoon said mordantly.

Since taking over the gig as poetry editor of the hebdomadaire 2007,  Muldoon has brought an unorthodox aesthetic philosophy to the table.

"You know what we're looking for?" he said. "We're looking for excitement. You know, I supposed that's it in a word. I've said this before, and I'll say it again. One of the things, it's really important to us, and this may seem like a really strange thing to say is that the poems should be at least as good as the articles by David Denby and by John Lahr, and the various other writers--Adam Gopnik.  I know that sounds like a slightly crazy thing to say."

A memorably quirky poem of late came from the pen of Richard D. Allen titled "On the Inevitable Decline into Mediocrity of the Popular Musician who Attains a Comfortable Middle Age." The poem referenced a certain rock musician while alluding to the Alexander Pope poem "The Dying Christian to His Soul."

"O Sting, where is thy death?"

Allen's above poem transposes the words "sting" and "death" from Pope's original and mixes high and low art:

"It's obviously not attempting to do anything along the lines of Paradise Lost might be attempting. It's a humorous squib.That's probably a technical low of what we do. There's probably not so much so-called light verse in the magazine as there used to be, but I don't make that much of a distinction between light verse and heavy verse, whatever that means."

But Muldoon is certainly not afraid of addressing low or pop art. He famously gave a close reading of Ke$ha's "Tik Tok":

Muldoon explained the origin of agreeing to the interview and his support of fun in art.

"I know," he began sheepishly. "I was sort of talked into that. What can I say? When you're a nice, young gentleman like yourself, and before I knew it, I was involved in that. But you know what? I'm a great believe in fun. And I think we have to have as much fun in life as we possibly can. And there are those that say that poetry and fun don't belong in the same sentence. And I'm not one of them."

When I went to snap Muldoon's photo, he made a comment about his frizzy hair--a sort of Irish static to its height. To what does he attribute his voluminous hair?

"I ascribe it to heredity," he said."I describe my own son as my son and hair."

Then he scrutinized me.

I explained my ancestry.

"You know what?" he said. "I may well be Russian stock too. You know something, it's just one of those things, my hair grows like crazy. It's not a problem most men of my age have. It's usually the opposite. But for the moment, it insists on sprouting like nobody's business. There's nothing I can do about it except get it cut every three weeks or so."

Does it fuel his poetry?

And with a hand through his flowing tresses, he walked off.