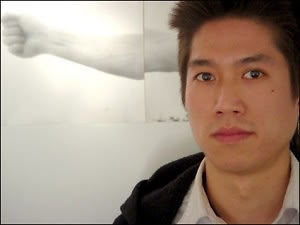 Tao Lin, the writer notorious for selling shares of his new novel as equity and hawking a book at Urban Outfitters, talked with us this weekend about the weird hybridization of literature and technology.

Sure, The Asian American Literary Festival this weekend featured The Sexy Nerd Party (Tag line: "Sorry, pal. If you're a writer or if you're Asian American, odds are you were once a nerd), but the climax came in a talk by authors Tao Lin, Tan Lin, and Tim Wu called "Internet Auteur" about net-neutrality and the way the web has reinvented the role of the writer.

Tao Lin is perhaps the most complicated and intriguing of this panel's three writers and is best known of late for selling stock shares of his new novel Richard Yates. The 2008 announcement that he would hold an IPO to sell off 60%  of the U.S. royalties for his book, the New York Times Freakonomics blog pounced on the news and reported that the shareholders would promote the book out of self-interest. Gawker called him "maybe perhaps the single most irritating person we've ever had to deal with."

Sitting with the 27-year-old writer in the Powerhouse Arena bookstore in DUMBO after the panel proved a particularly appropriate setting to immerse ourselves in Tao Lin's existential affectations and unconventional take on the publishing industry. The down-trodden cloudy day perfectly captured the depressively nonchalant and removed state the rogue author carries with him. Upon meeting him and confronting his understated nature--his distancing conversational mechanisms and slow speech pattern--we thought of him as immediately reminiscent of that kid in high school who aced everything without the slightest effort or care; his diffidence is at once confidence and I-don't-give-a-rat's-ass-what-any-one-thinks posturing, neither shyness nor disdain. 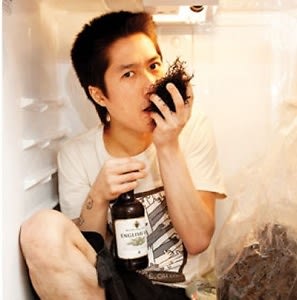 Lin is something of a lightning rod for critics on the interface of technology and the arts based on his unconventional writing and widely-panned self-promotion: he has published two poetry collections, you are a little bit happier than i am (2006) and Cognitive-Behavioral Therapy (2008). He wrote the novel Eeeee Eee Eeee (2007), and Urban Outfitters sold his book Shoplifting from American Apparel (2009) for a limited engagement. He also edits Muumuu House, a literary press.

I asked him who ultimately bought the shares to his book, released by Melville House on September 7, and he had a one-word response.

"Strangers," he said as if an elementary school student reporting on people with whom not to fraternize.

He explained six people he had never met ended up buying $2,000-shares of the book that gave them each a 10% stake in the U.S. royalties. The book chronicles the omphaloskeptic lives of "Dakota Fanning" and "Haley Joel Osment" and excavates in electronic epistolary form g-chat convos and text messages that rotate in and out of the narrative.

He has a general "what-evs" attitude affecting the disaffected nonchalance of his generation with particular attention to the ainsi-dit "douchoisie"--a word coined to use the hygienic device as an ad hominem attack on a certain sliver of a self-absorbed hipstery cohort.

Interviewing Lin is a frustratingly uphill battle against his laconic tendencies; though his curt responses may ostensibly indicate a thoughtlessness, they actually are in keeping with this understated confidence he carries with him.

For example, I asked him if his agent helped him create the IPO buzz as a marketing scheme for his novel.

OK, but how did he come up with the idea to include two child stars? Does he know Haley Joel Osment, for example.

The novel is, in fact, based on Lin's own life and he changed the character names on a whim.

"This novel is autobiographical, and the names were just normal names in the first, like, year of writing it. Then at some point I was like, 'I should just name them Haley Joel Osment and Dakota Fanning.' And then I did Microsoft find/replace and changed the names to that."

He's supremely cognizant of his dismissal of questions and punctuates his comments with a self-effacing giggle. He's aware of the comedy and intrigue of his blunt simplifications. He doesn't care about being articulate or explanatory and won't concoct some sweeping raison d'être for his work; his books speak for him, and he's not going to waste time or effort to explain them to anyone by philosophizing too much on the tech/lit collision:

"My goal is just to write exactly what I want to read."

So how have sales been thus far in light of this unorthodox investment structure in his novel?

He continued dryly as he explained the marketing of the book.

"The distribution isn't that good, I don't think," he said, saying that a lot of sales have come on-line. "Most Borders and Barnes & Noble don't have it.  I guess maybe one-third Amazon, maybe." 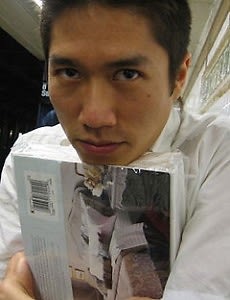 For someone who so excessively steeps his work in the social networking and tech communication of the times and how they conduce and reflect upon our interpersonal plots and interactions, Lin strangely claimed he's not all that concerned with technology.

But surely there's a difference between grandiloquent Medieval letters and slangy IM conversations?

"There is no difference to me," he insisted. "I mean words like 'thou' instead of 'you.' That's different. But that's a difference I'm not interested in. They both do the same thing."

Of course, Lin also proves a provocative figure in the publishing world, because he has all the scrappiness of a writer with vision and integrity but runs a delicate line of falling off the sell-out edge. He's not a commercial writer but embodies a strange sector of author-entrepreneur and innovator in the publishing sphere. His book Shoplifting from America Apparel of course formed an interesting niche market by being distributed and sold in Urban Outfitters--to modest fanfare, he's quick to admit.

"It was available for a little bit," Lin said, "but then it didn't sell well, so they didn't reorder it."

But isn't going to a trendy clothing and home decorating store buying out or selling in? Should that strip you of your artistic merit?

"It doesn't matter," Lin said. "It just doesn't mean anything to me. Commercialization. It's a book. It's the same."

Lin insisted upon some sort of nihilistic explanation to remove any corporate-oriented schematic in his sales; if anything, this hipster outlet allowed for him to justify some sort of as-yet-unvoiced artistic rationale. It's the literary equivalent of James Franco's "performance art" on General Hospital. Lin left the deal with his art and dignity in tact and made his own artistic choices within the framework.

"[Shoplifting] didn't have to change," he said. "Like it was finished, then it was sold to them. They didn't like commission me or whatever. Well, even if they did, I would do it the same way."

As you might escape from a writer who epitomizes the 21st century's internet infiltration, Lin's next project is actually quite tech-heavy. He veered off the novel path and proved that the Apple doesn't fall too far from the belletrist.

"I'm working on an iPhone app called North American Hamsters," he said. "It's drawings of hamsters and then descriptions of the hamsters."

The hamster is a recurring creature in his oeuvre, and he also revealed, with supreme seriousness, that he likes the giant squid as an animal. So there you have it: we live in an age where our novelists are creating tech products. Perhaps for anyone else this would be selling out, removing yourself from true art, but for Lin this is edginess and in keeping with the Zeitgeist.

[Images via The Phoenix, The Nervous Breakdown,The Village Voice]