Camilla Stærk is the brilliant designer behind STÆRK, a collection that has made a major impression on the fashion industry. Recently, Academy Award Nominee Karen O wore a Stærk custom gown to the 2014 Oscars and was voted by Vogue as one of the best dressed celebrities at the awards. In addition, i-D, Vogue, GQ, and Interview Magazines all featured the collection's menswear and womenswear designs, as well as its accessories. Camilla, originally from Denmark, has been recognized with numerous awards and she's contributed to major collaborations, working with ECCO, Eddie Borgo, Jen Tozer, Kopenhagen Fur, and more. In an article featuring Camilla in Rolling Stone, Camilla's described as a designer that "makes the sort of attenuated, shadowy attire that equally suggests a gothic interpretation of Coco Chanel's Black Swan-like elegance, the silhouettes of moody 40s cinema, and the razor-sharp heroines French New Wave music." We can't get enough of Camilla's dark aesthetic, and we know her career is one to watch. Read on for more on Camilla!

"Stay true to yourself." 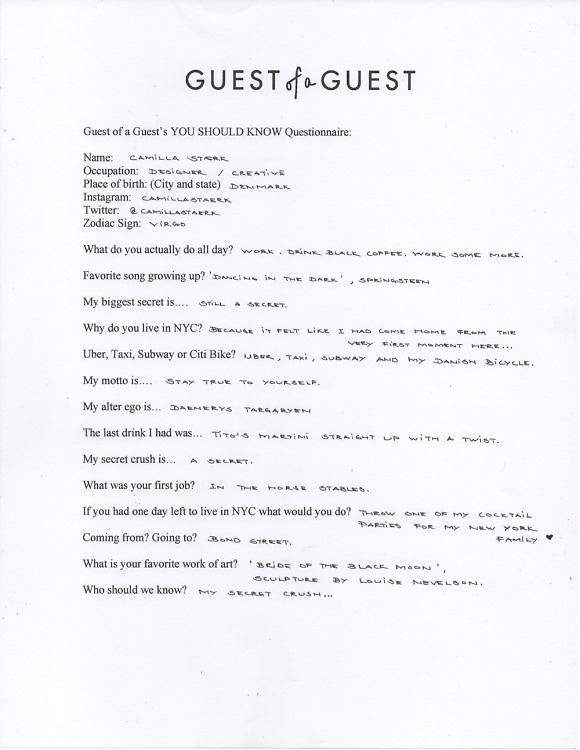 What do you actually do all day? Work. Drink black coffee. Work some more.

Favorite song growing up? "Dancing in the Dark," Springsteen

My biggest secret is... Still a secret.

Why do you live in NYC? Because it felt like I had come home from the very first moment here...

My motto is... Stay true to yourself.

My alter ego is... Daenerys Targaryen.

The last drink I had was... Tito's Martini straight up with a twist.

If you had one day left to live in NYC what would you do? Throw one of the cocktail parties for my New York family.

Coming from? Going to? Bond Street.

What is your favorite work of art? "Bride of the Black Moon," sculpture by Louise Nevelson.

Who should we know? My secret crush...