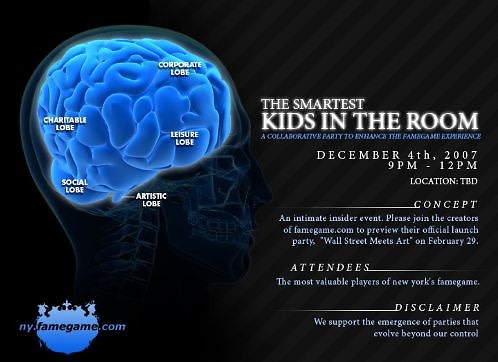 Maybe Kristian Laliberte wasn't as confused as everyone thought. This Thursday there really is going to be a party for "The Smartest Kids in the Room", an insider party to

"reveal our plan to infiltrate the media for the next three months and discuss our launch party in March. We will be explaining our view of how the media game works in New York, and we want to invite our closest allies to come and play."

Wow. Well we're flattered we're on the invite list, just not sure if this famegame is something we should embrace or not. We have open minds, but this thing has been around for awhile and hasn't really created much of a stir, however, we do occasionally miss our socialiterank so maybe this will help fill that void, at least for awhile until people start getting bored with this highschoolish popularity game that is our city. Oh wait, that's NEVER going to happen! Game on!

Curious about just exactly what FameGame is? Direct from the invite...

WHAT IS FAME GAME?Founded by Jose Serrano-Reyes, Seth Aylmer, and Tatiana Platt in 2006, Fame Game is a social networking site about the influential players in New York culture. The 120,000 profiles in the system are taken from New York media outlets, including mainstream periodicals, blogs, and event photography websites.

Fame Game provides a venue for New York cultural and philanthropic events online. Fame Game's mission is to allow users to lend their 'fame' to new projects and parties, thereby enabling creative projects to gain attention and sponsorship both online and in the real world.

The site is powered by an algorithm, called ANDY, that ranks members based on the amount of media attention they receive and the fame of their connections (together referred to as social capital). This information is updated and displayed daily, making the 'game' of New York culture more transparent and participatory. New members can join the site by getting their picture taken at a high profile event in the city, and then be linked to the other people in the photo.

This week Aylmer and Serrano-Reyes will be debuting the sculputural manifestation of ANDY, an 8 ft tall ticker that displays the social capital of artists on Fame Game. The work, which has been collecting proprietary information over the past year, will be on display on December 18th at the Sara Tecchia Gallery in Chelsea.

Playing in many different worlds simultaneously, such as art, media, fashion, and business is a key strategy for advancement in Fame Game.

FAME GAME'S NEXT PARTY: "ART PLAYS WITH CAPITAL, an evening of Art IPOs"

Fame Game is still under development, but will launch fully in March with a party that debuts and funds work from 29 emerging artists and philanthropists, tentatively titled "Art Plays With Capital.?" These 29 ideas will be displayed in their incubation stage at the event venue (sketches, business models, manuscripts) with the idea that each ticket to the event (priced at $200.00), will give the customer two $100.00 shares in which to invest in the 29 submissions. Each piece (whose needed capital investment ranges from $2,000.00 to $10,000.00) will be 50% owned by the artist and 50% owned by the investors (i.e.attendees, who can buy as many or as little shares in a piece as they want.)

The end goal is to track the impact of networking on artists' market value, while in the process helping these creators to employ social capital to their best advantage. Some ideas will have no financial exit scheme, forcing investments to be purely patronage based, while others could be sold for a profit that is then shared by the investor.

It is essentially a game (albeit with some financial risk), for people with a mind for the markets to play with the art world. Simply, the equation is this (capitalists + artists + partying together= more $ for culture.) Explains co-founder Seth Aylmer, "what we are ultimately trying to do with this piece is to get more cash flowing into the art world" To do so, the Fame Game team has created a game joining the generation of wall street kids with the next big cultural innovators. By indexing the party and media information of New York?s artists, they are essentially encouraging more artists to play in media and watch how it affects the price of their work.

The concept is that each of the 29 projects should debut within a year--- with 29 parties to happen over the course of that time to celebrate their inauguration. Indeed, Each project will have its own robust profile on Fame Game that will track the submissions patronage, media mentions, investment returns, etc. Next year, Fame Game hopes to have an award ceremony of sorts acknowledging those creations that garnered the most attention in several different categories.