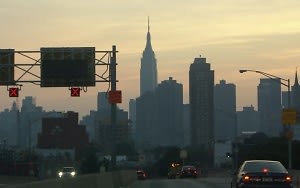 I'm back in New York after ten days in Berlin. More on the trip later, but for now: the return. There's a bitterness that comes with ending successful travels. But if you're lucky, it's countered by the sweetness of being home. Herein, some essential steps to getting back in the New York groove. -

Fly into Terminal 3 at JFK: Upon touching down on New York asph 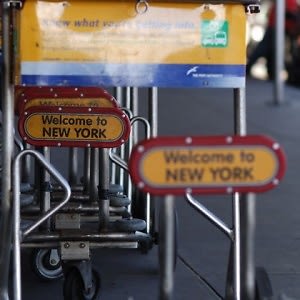 alt, I briefly wondered how anyone flying into the city could ever make it past the airport and into town instead of buying areturn ticket to wherever the hell they came from. How could JFK, the international airport for one of the world's preeminent cities, be so utterly charmless? You don't see a window before glacially snaking through customs. The people working at currency exchange seem about as adept with paper money and basic arithmetic as a delayed cocker spaniel. You step outside and are forced to dry hump dozens of other arrivals penned onto a 2x4 sidewalk. If you want relief from that, you must cross a busy, unmarked intersection to reach a wider expanse (and cell phone reception) of, in summer, baking hot cement. All to the soundtrack of car horns, whistles and multilingual braying. Then, after a few minutes of disorientation you realize, with a grimace, that this is New York, condensed.

Take in Chinatown: Yes, even in its odorous summer state. Because even though every city has its ethnic quarters, few seem as enveloping and alien to their surroundings as Manhattan's Chinatown. Even fewer offer five juicy pork dumplings for a buck.

Eat a classic New York slice, the New York way: The cat's out of the bag when it comes to New York's quintessential culinary contribution. Certain neighborhoods of Berlin seem to boast more pizzerias per capita than Manhattan. But even if some of the joints come disconcertingly close to matching hometown quality, they don't beat the oily original. And no where else does it seem like a no-brainer to fold the slice in half before scarfing it down.

Order delivery: Whatever, whenever. Why hasn't the rest of the world really caught onto this?

Glimpse the skyline: Sometimes you can accomplish this from the plane, getting a bird's eye view. Sometimes you get a first, panoramic look driving toward midtown from outer Queens. But the best glance might be a surprise one, noticed peripherally  while crossing Mott Street, and causing a risky rubberneck in the middle of Chinatown traffic, no matter how many times you've seen it.

Drink at Mars Bar: Berlin's got no shortage of punk bars. But Mars is a dive that doubles as an art gallery. It considers draught beer a yuppie extravagance. Its bathrooms could inspire about six bodily...expulsions on top of the original cause of the visit. And it rubs up against a luxe condo complex, chichi boutiques and a "bespoke chocolatier." Only in New York could that seem natural. Order a whiskey (something American) and beer (Budweiser) to forget the classy neighbors anyway.

Weep with joy at your return to excessive, wasteful, spine-chilling air conditioning.