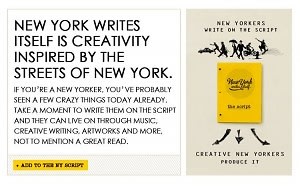 "All the world's a stage and all the men and women merely players" [via].

William Shakespeare couldn't have said it better and in this case, the stage is New York City and the players are the visitors, men and women who live here.

Wherever you are in NYC, at some point you will witness or hear something which makes you think "Did that just happen?" Well now you can contribute to the city's "play" by documenting all the craziness you encounter roaming through the city.

Through the ongoing initiative called "New York Writes Itself," New Yorkers and visitors called "scribes"- record their encounters in the city as part of the "script" via the NYWI website. Your script can then foster the city's creativity by inspiring a song, poem, movie, artwork and much more. Artists and creatives can pick submissions from the script to turn into their own productions or they may be produced by NYWI's commissioned artists.

In addition to inspiring the city's creativity, your "script" can also be selected and read by "The Chairman" as part of the site's weekly webisodes.

So next time you come across something that makes you do a double take or even just laugh, just imagine that your experience could be turned into a work of art.

QUOTE: I can’t wait for Christmas so I can get a bunch of new socks and underwear!

A young man shares his Christmas wish with his friend.

A suit steps into 7th Avenue, hailing “Taxi” while yammering into his BlackBerry. It’s 630pm on a hot July night. A taxi pulls over. The driver leaps out. His partner emerges from the passenger side. NYPD, undercover. They leave the doors open, like arms akimbo; guns cocked, they advance on the car parked ahead. But the suit is busy. He doesn’t look. He doesn’t see. He flings open the backdoor and slides in. Only then does shock register. But it’s only shock that this taxi, this town, is not fully at his beckon. He gets out, slams the door, angry. Still yammering away, he hails the next taxi.

My aunt, who lives in rural Pennsylvania, frequently visits New York and told me she saw a man walking down the street wearing a potato sack over his head. But, she said, “the really strange thing is nobody even looked at him.”

Become a scribe and be a part of the script by going HERE.