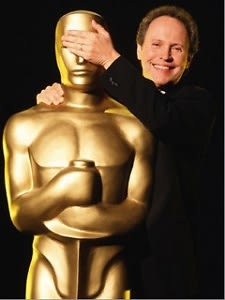 Billy Crystal will be hosting the Oscars for the 9th time on Sunday night, which is a big relief after the disaster that was the 2011 Oscars. 2011 co-hosts Anne Hathaway and James Franco were selected in order to draw a younger audience to the show, but when they failed to make the evening any cooler or more fun than it had been in previous years, the Oscar committee looked to an old favorite to give the 2012 awards the boost it needs.

Billy committed to hosting this year's awards back in November, and confirmed the rumors on his twitter:

Am doing the Oscars so the young woman in the pharmacy will stop asking my name when I pick up my prescriptions. Looking forward to the show

We're so excited to have Billy back on stage again this year, and after looking back at some of his best moments from the Oscars, we remember why.