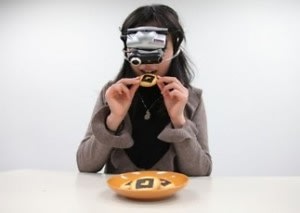 Researchers in Japan are in the process of developing "diet glasses," augmented reality glasses that trick people into eating less. The glasses work by altering the apparent size of food, while keeping the size of your hand constant. During the first level of testing for the prototype, digitally manipulated cookies appeared 50% bigger than they actually were, causing the subjects to consume 10% less of the snack.

Users believe they are actually eating more because of the visual trickery of the glasses. Initial studies revealed the technology works both ways, too. When the snack was projected at only 2/3rds of its true size, participants ate 15% more of the junk food. The research team also designed something they call the "meta cookie". Another dieting trick, the "meta cookie" appears as a sweet snack, when in reality its just a plain biscuit. However, the appealing image, in combination with matching sweet scents from nearby spritzers, tricked participants into believing they were consuming a tasty treat.

The goggles have the potential to trick the subconscious into believing a false reality. Obviously the glasses are still in their inital testing phases, but perhaps this is something to look forward to for weak willed dieters who have tried and failed other dieting programs.