It's a brutal day in New York. The Jets lost, it's the coldest day in over 6 years, and we all are going to have to start paying to read the NY Times online. On the other hand, social media is rocking in this town, with an official Chief Digital Officer in place and even the Pope giving his blessing! All of this and more to start off our work week below...

1. Football. I'm not a huge fan of professional football, but, as a New Yorker, I felt for Jets fans last night. I hope this photo of Joe Namath in fur will put smiles on your faces today. He was just one of the best characters in sports history, wasn't he? 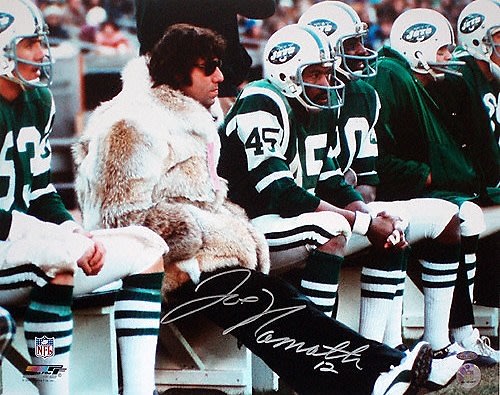 2. Mayor-hopeful Rahm Emanuel's team, the Chicago Bears, were also beaten by the Green Bay Packers. His was an interesting Twitter to follow during the game:

3. Keith Olbermann's contract is up. Here are some recaps to review:

4. New York City gets a chief digital officer. This is so cool. My friend, Rachel Sterne is going to be the city's advocate for digital media and at the same time helping to hone the City's use of social media for years to come. New York, I love you. [Capital]

6. Hurray! Pope Benedict gave a qualified blessing to social networking today! Go ahead and carry on with your cyber relationships, but just know that they are no substitute for real human contact, mmkay? [NYT] 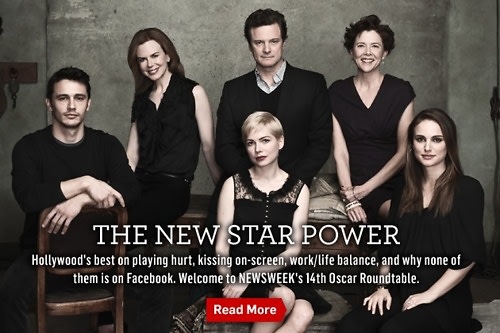 8. Chess is one girl's ticket out of the slums. Meet Phiona Mutesi, the 14-year-old girl from the Ugandan slums of Katwe who has just been recognized as a chess phenom and has traveled to Russia to compete in the 2011 Chess Olympiad. [ESPN via dens]

9. The year 2011, as predicted by Edison in 1911. 100 years ago, a newspaper published Thomas Edison's musings on the far-off future of 2011. According to the famed inventor, we should be driving around in solid gold taxis. [i09 via Soup]

10. Digital Foreplay. One new study suggests that women feel more intimate with men that they've had digital relationships with, causing them to move the relationship forward more quickly. [NYP]

11. The Babysitter's Club was one of my fav. book series. Which is why, I got a major kick out of this "Where are the members of the Baby Sitters Club now" post from the Hairpin today. Here's a sampling: "Kristy Thomas: Well obviously Kristy is a lesbian. She and her partner, Tori, started up a gay softball league when they moved to Baltimore in 1999, which Kristy coaches. Reminds her of her old days with The Krushers!" Hysterical. [Hairpin]

12. Speaking of going back to my childhood, did you ever wonder how that popular computer game Oregon Trail, which so many of us played in computer class, got its start? [CityPages]

13. It was 27 years ago today-Jan 24, 1984 - that Steve Jobs demonstrated the Apple Macintosh to a crowd of about 3,000 people. Just two days earlier, Apple had debuted the "1984" commercial during Super Bowl XVII, which introduced the personal computer for the first time. The short clip (below), which references  the George Orwell novel of the same name, has since been recognized as a masterpiece in advertising and is considered one of the most successful television commercials ever released in the U.S. [TheAtlantic]

14. "Portland is the city where young people go to retire." -Opening scene of Portlandia. O.K., but how long can they stretch the joke? [CajunBoy]

15. The NY Times is going to (really!) start charging you for their online content. Really. [NYM] 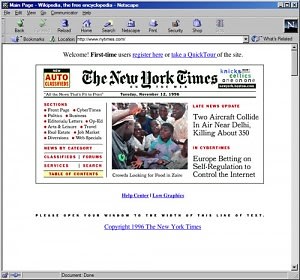 19. The Heads of State in order of succession for the U.S. and China, and their college majors. Notice anything? This is really really cool. [Politico] 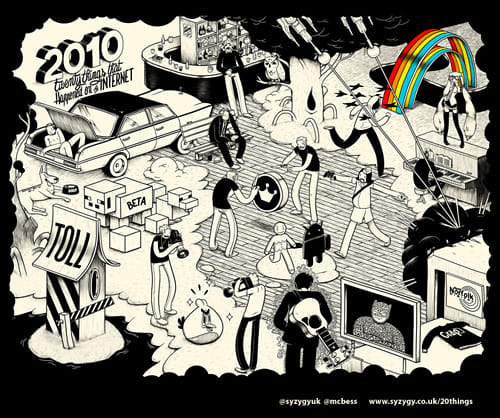 21. Who will be the Betty White of 2011? Help urlesque pick! [Urlesque via Nick Douglas]

22. The 1,000 things you don't know about women. Every man should probably take a glance at this. [Esquire via minilaarni via population1]

24. The continuing saga of Kenny Scharf's mural on Houston Street...

...and how the New York Post lifted the story from Animal. [Neighborhoodr]

25. This is pretty hysterical. Photos of the banner ads outside of two churches located across the street from each other. [Castlerising]

27. The Daily What's United States of Shame. What is your state the worst at? Click through for an explanation of how each state got its mark of shame! [Daily What] 28. A heck of a lot of people are still using AOL dial up. Whaaa? I thought my parents were late to the high speed/wireless game. Anyway, the actual % is TBD, but it's a ton. WSJ and New Yorker have wildly different AOL dial up stories. Back in Sept, the WSJ pinned AOL's dial up buisness at 43% of revenue. A recent New Yorker story has that number at 75%. [SoupSoup]

29. Scrabble + Rubik's Cube = The Scruble Cune. Check this out! [Walyou via Nick McGlynn]

30. I'm obsessed with this Octopus Chair by Maximo Riera....one piece of his "The Animal Chair" collection which  "constitutes a diverse range of species, from mammals to reptiles, and even insects. Each creation retains the animal's natural vitality whilst being totally biologically accurate in their appearance." [Simko] 31. What "Modern Family" says about modern families. I'm a big fan of this show, was exciting to see in Sunday Times. [NYT]

32. Stoners will now have their own soft drink. It's the new Four Loko! An entrepreneur in Cali has announced plans to sell Canna Cola, a soda laced with THC, in the state's medical marijuana dispensaries. [Gawker]

33. A girl gets locked out of NYC apartment, ends up with a cop forcing her to withdraw $600 from an ATM in the middle of the night, sobbing. I think it's safe to say we all can commiserate. [PonyPony]

34. Finally, GofG's editor at large, Stanley Stuyvesant, is NOT HAPPY with the weather. He can't wait for summer! Well, that's all for me today. Do you have something to include in tomorrow's list? Email me Rachelle@guestofaguest.com