Anderson Cooper FTW. Live reporting from Egypt leaves us speechless. Malcolm Gladwell riles people up again. College students are giving up Facebook for 30 days, why Groupon has lost its magic, and wtf?!...there will be no cheerleaders at this Sunday's Super Bowl?! Plus, check out Andy Warhol's old apartment!

1. Egyptian uprising is now in its tenth day. I could not take my eyes off of CNN's Anderson Cooper's live coverage from Cairo last night. Here are some key bits: 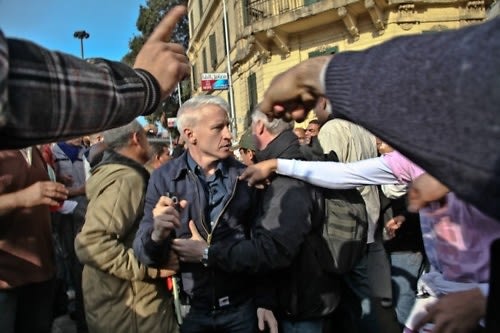 [Who else was captivated by Anderson Cooper last night? Kidder]

Video from the attack on Anderson Cooper crew. [CNN]

A useful map of overview of Tahrir Square, where the violent clashes took place. [NYT]

Unbelievable photos from the protests. [NYT]

The British telecommunications company Vodafone is being accused of sending out text messages urging pro-Mubarak supporters to "confront" protesters. [Soup]

"Imagine if you had, in Times Sq, 2 gangs fighting together for over 15 hours, and the government didn't intervene. There's no other explanation." -CNN's Ben Wedemen, explaining why he believes the violence is state sponsored. [InOtherNews] 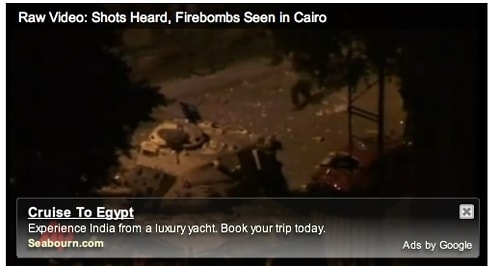 Mother Jones thinks Gladwell is "totally on the money." [MotherJones] 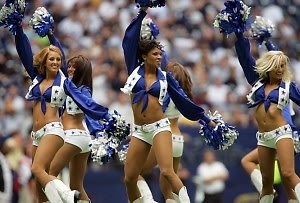 3. Bummer of the day: There will be no cheerleaders at this year's Super Bowl game this Sunday. Although the game will be played at the stadium KNOWN for its cheerleading squad, the Dallas Cowboys, neither the Green Bay Packers nor the Pittsburgh Steelers have squads. This will be the first Superbowl without cheerleaders since games I&II (over 40 years ago). Anyone else think the Cowboys squad should sub in? [USAToday]

4. Read the Daily without an iPad. [Fimoculous] Plus! The Daily has its own Tumblr! [Thedaily]

5. Justin Beiber's premiere for his new film, "Never Say Never" (in 3D) was last night in NYC. Somehow he also managed to hit up the Knicks game....where he got booed by fans heh. [@thecajunboy] 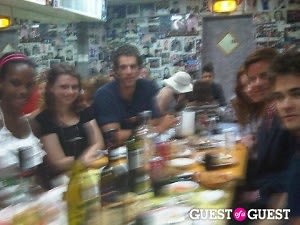 6. Happy Chinese New Year. It's the year of the rabbit I'm told. Check out these Chinese Restaurants to celebrate the new year at tonight. [Refinery29] Also, left, team GofG back in the day at Wo Hop (on the list). you have no idea how long it took me to find this photo (from July '09). But I'm so happy I did! Kunst, Chiara, JT, Cameron, Mandato, Brooks, Carson (though you can't see her) etc. They're all there!

7. Mark Bittman's "A Food Manifesto for the Future" is a great roundup of ideas that would make the growing, preparation and consumption of food healthier, saner, more productive, less damaging and more enduring. A required reading for anyone that cares about what they are putting into their body. [NYT]

8. Dave Morin, ex-Facebooker, just turned down $100 million from Google for his new intimate social network site Path. Instead he took an $8.5 million funding round. Whaaaaa? [Valleywag]

9. Ten Recipes you can make in your coffee pot. This is AMAZING. I hope my brother (a freshman in college) is reading this! [Geekosystem]

10. Ten Common Phenomena explained. What is that falling sensation upon falling asleep really caused from? Why does your skin wrinkle in water? Esp useful for anyone with children under 10. [Supertightstuff]

11. No-Cost Contraceptives. The Obama admin is examining whether the new health care law can be used to require insurance plans to offer contraceptives and other family planning services to women free of charge. [NYT]

12. This is Zach Wahl. He has two moms. And, this was his speech before the Iowa State House this week as they deliberate on a vote to ban both marriage equality and civil unions. Amazing: [TKTC]

13. An unreleased Apple iPad was spotted at the News Corp event. [Soup]

14. Watch the Social Network "How did they ever make a movie of Facebook?" Here's a 93-Minute behind the scenes documentary. [Slashfilm]

15. Jennifer Aniston talks to WWD exclusively today. She is NOT adopting a child, not writing a memoir, and NOT that upset about "The Rachel" hairdo. What she is doing? A new fragrance. Duh. And with the quote below, I go back to despising this actress. [WWD]

"One tradition I have with my friends is that when one of us gets married, we have a ton of fragrance oils and pretty bottles at the bachelorette party. Everyone puts a drop or two in a bottle for the bride and makes a wish, and the bride wears our creation on her wedding day."

16. Facebook Detox. 18 college students in Northeast Philly have volunteered to go cold turkey: no Facebook for 30 days in order to see how the social networking site is really affecting their lives. Every Monday, a support group will meet so they can talk about it. [Philly.com]

17. This is both insane, and a bit genius. Apparently a Clinton Street resident by the name of Robert G. Lopez allegedly owns the trademark for the area designation"LOWER EAST SIDE." He has been operating an independent line called "L.E.S. Clothing Co." since '97 and is suing J.Crew for trademark infringement. [BoweryBoogie] 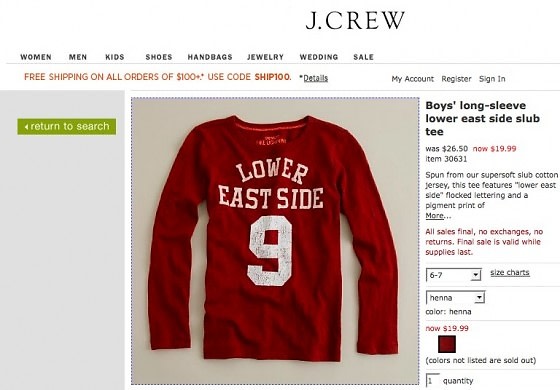 18. Shorting Groupon.com. I'm no expert in digital marketing strategies, but I'm pretty sure being called out by a major NYC media writer and pissing off a well known tech writer are probably not good things to do:

Hopefully the company's last-minute Super Bowl ad is better than its deals have been. [AdAge] 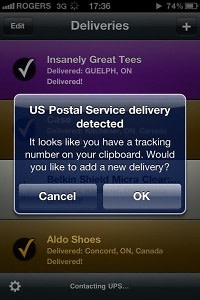 19. Delivery Status App. It detects if you have a tracking number on the clipboard on launch. Any online shopper is going to go postal over this new postal service app! [Naveen]

20. Check out this photo of Kanye West as an elementary school student. [Flavorpill]

21. The Top 10 Logical Fallacies in everyday arguments. Catch up on your knowledge of the difference between "ad hominems" and "ad ignorantiams." [Spytap]

22. Business Insider seems to have gotten their hands on a leaked copy of AOL's Master Plan. "The AOL Way" is an illuminating look into how AOL, a company with hundreds of millions in dollars in annual funding, is trying to turn itself into a 21st century media giant.  And they are focusing on traffic not quality of content. [BI]

23. "Tea is the hot new drink in NYC, being sipped by celebs and popping up at parties."-NYPost. LOL TREND STORIES. [NickDouglas] 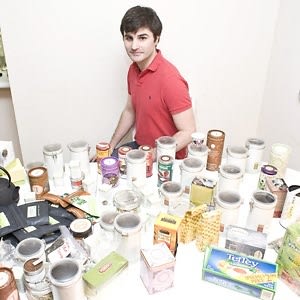 [Spencer Greenberg, 27, is such a devoted enthusiast he presents guests at his apartment with a guide to his 40-strong tea collection. NYP]

24. Spark Capital, the uber cool tech VC firm is hiring! Check out how you can apply to be the next Mo Koyfman (god help us!) [Mo]

25. Nerd Boyfriend is proud to be a guest curator for Etsy. We are excited they are! [NerdBoyfriend]

26. Have you ever wondered what it's like over at Martha Stewart Living? Doree Shafrir got an inside look at the insanity. And, it's all insane. [Doree]

28. Winter. Holy moly. Did you guys see this photo of what the storm looks like from space? [Deadline] 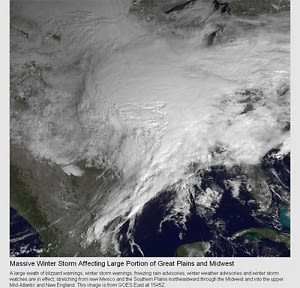 29. Yesterday the White Stripes announced that their band has officially ended and will make no further new recordings or perform live. [Whatevs]

30. Did you know that February 13th is mistress day? Ew. [HowAboutWe] 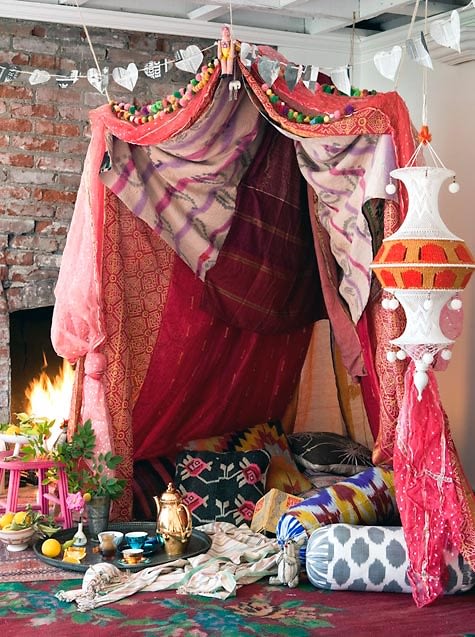 32. Will leave you with a look at Andy Warhol's old townhouse on 89th and Lexington: [exhibitionA] 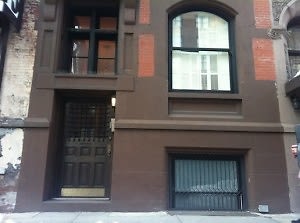