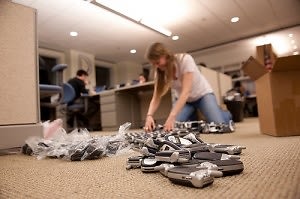 1. Obama joins Tumblr. [Barackobama.tumblr.com] Well this is big news. And, if the President is in any way like the rest of us, it spells trouble...prepare for his productivity level to drop dramatically.  The President's first Tumblr post already has 9,559 notes. A sample of it:

There will be trolls among you: this we know. We ask only that you remember that we’re people—fairly nice ones—and that your mother would want you to be polite. Thanks, Tumblr. We’re looking forward to getting to know you.

Does this mean that pretty soon he will be starting memes like Young Manhattanite? Time will tell. Tumblr can be a fickle world, and I'm excited to see how the Pres (or whatever aide is running the Tumblr for him), will take on the endless, and often times nonsensical ramblings of the Tumblr world.
1 of 20