1. Occupy Oakland. Hundreds of people marched through Oakland's downtown streets in protest against the evacuation of an anti-Wall Street camp. Things got violent when the police showed up with tear gas and flash bang grenades. The photos look like they are taken from another country.... [WaPo] Clashes in Oakland [Reuters] The NYT coverage of Oakland [NYT] 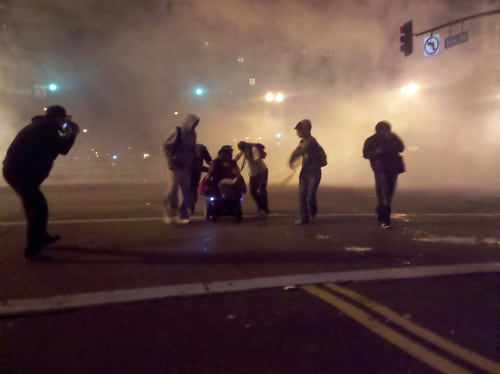 Police gave repeated warnings to protesters to disperse from the entrance to Frank Ogawa Plaza at 14th Street and Broadway before firing several tear gas canisters into the crowd at about 7:45 p.m. Police had announced over a loudspeaker that those who refused to leave could be targeted by "chemical agents." Protesters scattered in both directions on Broadway as the tear gas canisters and several flash-bang grenades went off. Regrouping, protesters tried to help one another and offered each other eye drops. One wounded woman, who others said had been hit by one of the canisters, was carried away by two protesters. [SF GATE]

There are several YouTube videos out there. I thought this was one of the more stable ones:
1 of 15