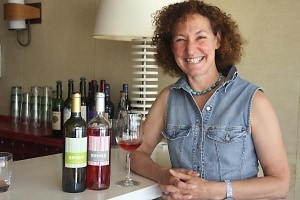 Sag Harbor resident Lisa Donneson knows her grapes. Donneson, the author (with her husband, Henry Weisburg) of The Guide to Sag Harbor, received the Diploma in Wines and Spirits from the prestigious WSET in 2006 and then decided to launch her own line of wines with stand-out bouquets.

Donneson isn't interested in rare, expensive vintages; her Boukés are simple, fun, everyday wines, wines which really epitomize the best of what Long Island's grapes can be. Right now there's only a white (a blend of chardonnay, pinot gris, sauvignon blanc, and gewurztaminer), and a rosé (Cabernet Sauvignon), though a red is in the works.

Both are under $20, and the white, with its notes of lychee, white peach, and passionfruit, is particularly delightful. See if you agree at the American Hotel in Sag Harbor, Race Lane Liquors in East Hampton, DePetris Liquors in Bridgehampton, and Atlantic Wines & Liquors in Amagansett,where Lisa will be hosting a tasting Friday, August 15th.