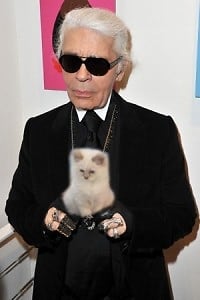 Chanel designer Karl Lagerfeld is known for his over-the-top fashion shows, outlandish remarks, and chilly demeanor, so it may seem unlikely that this ice-man has a secret soft spot...for cats. Or at least one cat, his Siamese, Choupette.

Karl Lagerfeld is specific and rigid when it comes to his daily regiments: he sleeps each night for exactly seven hours in a custom made white shirt; he has his sheets changed daily; and eats the same breakfast every morning: steamed apples and a protein shake.

But if you think Karl is spoiled, just wait till you meet his cat. Choupette is less than a year old, but this Chanel heiress is more pampered than most of us will ever be in our entire lives. If I die and come back as anything in this world, please let it be Choupette Lagerfeld. 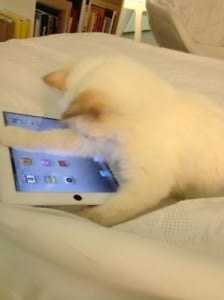 1. Choupette can use an iPad. Ok, using an iPad is no great feat. Even babies can point at the user-friendly icons and pull up TV episodes or weather reports. But Choupette is a cat. I don't know if I'm more impressed with the fact that she can use an iPad or the fact that she owns an iPad, but either way, an iPad is only the beginning of this cat's luxurious lifestyle.

2. Choupette has full-time help. In an interview with WWD, Lagerfeld revealed: "She has two personal maids, for both night and day."

3. In the same interview, Lagerfeld referred to his fluffy friend as "a kept woman."

4. Just like Karl, Choupette has a very specific routine. Karl told WWD: "She has lunch and dinner with me on the table, with her own food. She doesn't touch my food. She doesn't want to eat on the floor. She sleeps under a pillow..."

6. When Karl can't be with his precious kitty, he makes sure her every move is carefully documented. In a journal that is already 600 pages long, Karl requires that Choupette's maids write down her eating and sleeping schedule when he can't be there to observe for himself.

So, it's clear that Choupette is living the good life, and it seems that there's no stopping this fancy feline. Her latest move? Muse for Chanel. That's right, soon we'll all be able to have a piece of Karl's princess in the form of a Chanel bag. Oh Chupette, what can't you do?