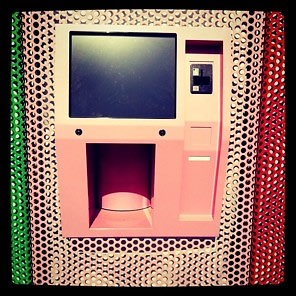 For only 4 dollars, customers can walk up to the sherbet-colored machine, browse and select one of eight daily flavors (there's even one for your pup!) on the touch screen and receive an individually packaged cupcake. Continually stocked day and night, the ATM can store 600 freshly baked cupcakes at a time. The automat cupcake machine is forecasted to dispense over 1,000 sugary confections a day.

According to the Washington Post, the first capital cupcake ATM is anticipated to open by August at the Sprinkles Cupcakes' Georgetown location. The Sprinkles ATM just might give the never-ending lines at Georgetown Cupcake a 'run for their money.'