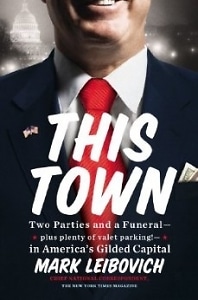 A book hasn't caused this much buzz since Fifty Shades of Grey. Mark Leibovich's This Town is already turning the District on its ear... and it isn't even out yet.

The New York Times opened up their review on the book with a paragraph that is likely to upset many Washingtonians, be them native or transplants:

Of all the irritating things about Washington — the phoniness, the showy cars, the utter inability of a metropolitan area of 6.9 million people to produce a single decent slice of pizza or a passable submarine sandwich with oil and not mayonnaise — none is more infuriating than the local insider habit of referring to the place as “this town,” as in “He’s the most important power broker in this town” or, more likely (and worse), “The way to get ahead in this town is to seem not to be trying to get ahead.”

Let's forget the travesty about the pizza and focus on the real issue at hand. Is this how the rest of the country really views our nation's capital?

According to Leibovich, it is. The account he penned begins at the funeral of Tim Russert and delves into the District's self-loathing and contradicting self-importance. The book doesn't name names, but The Washington Post has done their research and created an unauthorized index of those in the tome.

The verdict is still out on the book, but you better reserve your copy now. It's gonna fly of the shelves of Kramerbooks.