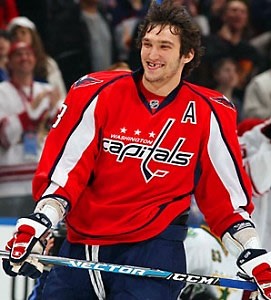 Alex Ovechkin has been keeping up with the Olympics just like you! The Caps player has been watching his girlfriend Maria Kirilenko compete in London (although she's competing for Russia).

Isn't that cute?!?!?! Despite the grammatical errors, we can't help but smile at his support. Some girls have all the luck with men.

Related: [Maria Kirilenko And Ovie Are NOT Engaged, But Might Be Soon!]