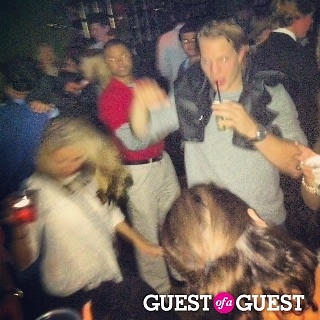 Looks like John Carlson is having a lot of fun during the NHL lockout! We spotted the 22-year-old New England native cutting a rug at George on Saturday night with a few friends, and he was paying particularly close attention to a mystery blonde (her head is down in this shoddy photo I took). We spotted the hockey defenseman following her to the bar on several occasions, and dancing with her by the DJ booth.

Guests at George seemed oblivious to his presence.

There were rumors that he was linked to recently single (and also blonde) ABC7 sports reporter Britt McHenry, which she denied, telling Guest of a Guest, "I just know him from work and haven't even seen any of the Caps recently because of the lockout."

Update 2pm: John Carlson also told Guest of a Guest that his relationship with Britt is strictly professional, and that he was never romantically involved with Britt.