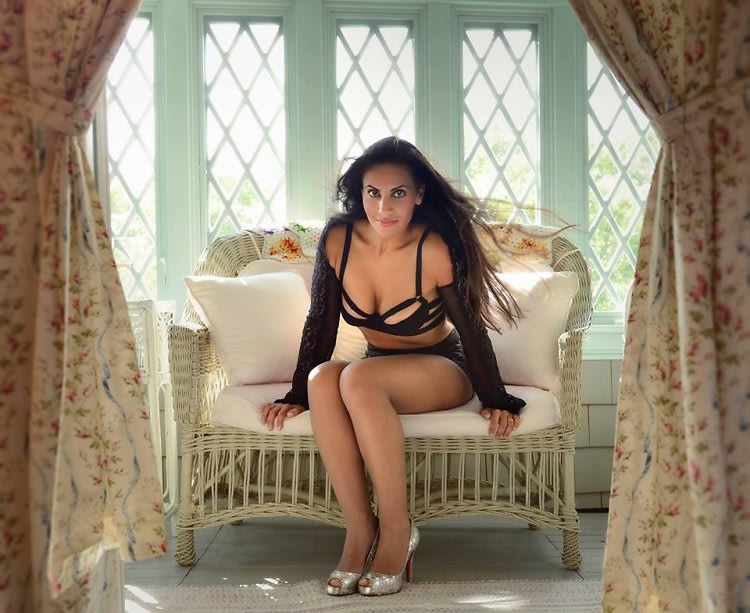 There is a lot of buzz in these dog days of August about Fox News' Howard Kurtz's call out of Pari Bradlee's sensational Facebook account. It seems to be a mix of people sticking up for Pari or calling Kurtz a pervert.

First off, who is Pari Bradlee? Pari is a very outgoing yoga instructor with a few Washington socials as clients. What she is best known for is marrying Quinn Bradlee, son of media bigwig Ben Bradlee and Georgetown hostess Sally Quinn. The photos in question are this rather artistic photo of her naked twisting body, and this, the revealing swiss cheese bra.

Perhaps what makes Kurtz's article so controversial was that he poked at a proverbial elephant in the room. Yes, we all follow Pari on Facebook because her seemingly manic quotes about art and life, photos of herself kissing male celebrities on the cheek (but not Quinn), and a whopping 215 cover photo changes since June 2012 make her profile thoroughly entertaining and perplexing--because she married into the Bradlee family. And now, a journalist has elevated it from hush hush whispers at parties to a bold, published call out of her unorthodox virtual behavior.

It is no surprise that the members of the Bradlee family are all taking it in stride. Pari's cracked a few jokes on her newsfeed challenging the appropriateness of a photo of herself with Quinn (finally, a photo with Quinn!), and Sally's response to the incident was perfect:

"Pari is a beautiful woman and she is a yoga teacher and I don't see what the problem is, I don't see the problem," said Quinn, who added that her son and Pari will be married three years on October 10, and have been together five years.

Now, the cover photo is of Pari with her leg behind her head, and one of her smoking in a dark setting. Let's not be quick to assume that she changed the photos for Howard; no, it's been a few days and that's how often she typically swaps them out. It seems as though there is more virtual entertainment to come from the famous daughter-in-law, which we hope means more journalists critiquing it.