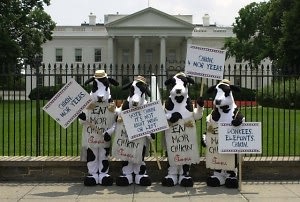 Never has fried chicken been so political! The Great Chick-Fil-A Debate has been taken to a new level this week with Mayor Vincent Gray speaking out against the restaurant chain.

Chick-Fil-A's support of anti-homosexual groups has received a lot of flack within the past couple of months from politicians and LGBT groups while some right wing supporters have praised Chick-Fil-A's conservative values.

It seemed that Grey was unaware of the issue at hand after a reporter asked him to weigh in on the Great Chick-Fil-A debate. Mayor Gray took to Twitter to speak out against the company and their practices.

But according to mayoral spokesman Pedro Ribeiro, after Gray was briefed by aides on the restaurant and the controversy surrounding it, he asked, "Why would I want one of those in the District?" In a later tweet, Gray added: "Given my longstanding strong support for LGBT rights & marriage equality, I would not support #hatechicken."

How could he not be aware of their political stance? Did he not log onto Facebook and see Boston Mayor Menino's letter to the company banning their stores in Boston? Alas, members of the District will have to find their fried chicken elsewhere.