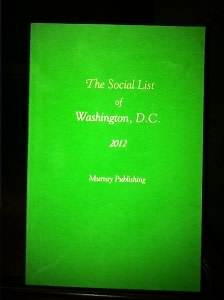 The Washington Social Register, commonly known as The Green Book, today announced in a release the appointment of Peter L. Murray as the new publisher. Murray is the great-grandson of the book's founder, Helen Ray Hagner.

The previous publisher is simply listed as "Murray Publishing" inside the book. Prior publishers were Jean Shaw Murray (1977-1986), Carolyn Hagner Shaw (1942-1977), and Helen Ray Hagner (1930-1942). Peter L. Murray served as the publication's associate publisher for the last 15 years. The fact that the book is being passed to the fourth generation only adds more tradition and mystique to the already esteemed book.

The Social List of Washington was founded in 1930 in response to a need identified by Hagner, whose aunt, Bell Hagner, was the first White House Social Secretary under Mrs. Theodore Roosevelt.  Traditional social directories did not list diplomats, government officials, or new entrants to society, and Helen Ray Hagner realized the importance of including diverse members of Washington’s elite when planning social functions...like where to seat whom.

The Green Book plays a unique role in guiding social activities in our nation’s capital.  It serves members of Washington society, including philanthropists, leaders in the diplomatic community, and leaders in the fields of business, law, and government. In addition to listing the addresses and vacation homes of these leaders, there are also tips on how to host visiting dignitaries--from how to properly address a letter to a former senator, to how to write a place card when the president is coming over for dinner (all you have to write is "The President").

The book also has a list of Washington-area clubs, associations, museums and societies.

Beth Ann Newton will remain as the book's editor.

Selection to the book is by invitation only, and sales are limited to members and approved individuals and organizations.