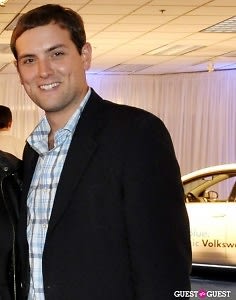 On Thursday, Luke Russert, 26, emceed the 27th Annual Tim Russert Congressional Dinner, named for his late father. According to Yeas & Nays, Luke's task was to beckon guests to make donations via text to the Boys & Girls Club, and as the donations rolled in, personal messages to Luke from donors trying to set him up with their daughters flashed on the big screen.

Things got strange when Russert returned to the mic to address the texts.

“I’m happy to raise money off my sex appeal,” he said, to chuckles. “But I’d be remiss if I didn’t say that at my table I’ve got five upstanding young bachelors who are St. Albans graduates. College graduates. They all have five-year plans.” The audience continued to chuckle until Russert added, “So there’s plenty of meat to go around.”

Throat clearing and spotty giggles ensued. Russert thankfully moved on and announced that $52,000 had been collected so far that night, and the audience broke into relieved applause.