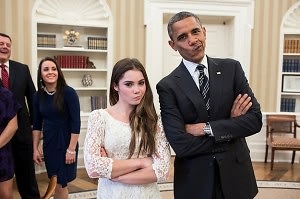 Cheer up, Prez, it's not so bad! On a recent media tour, the girls of the breakout Olympic gymnastic team stopped by the White House and President Obama was not impressed.

McKayla Maroney, this century's baddest bitch, did her infamous pose of defeat with Obama. Pose of defeat? Shouldn't Mitt be doing that somewhere?