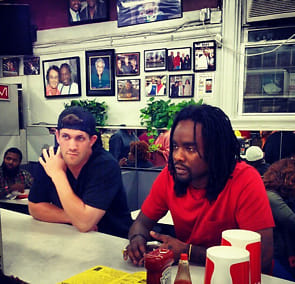 On Monday, Bryce Harper and Wale capitalized on their growing popularity in DC and dined at Ben’s Chili Bowl. Tweets by both following the dinner playdate, organized by ESPN (as pointed out by Reliable Source), certainly show signs of a growing friendship...with perhaps a shout out to Harper on one of Wale’s next tracks?

Regardless, we’ll be sure to stop by Ben’s Chili Bowl next time we are in the area in hopes of catching another star sighting. Wale and Harper are not the only celebrities to make the trip. Ben's Chili Bowl has been a hot spot for celebs such as Bill Cosby, Chris Tucker, Bono, Anthony Bourdain and President Obama.