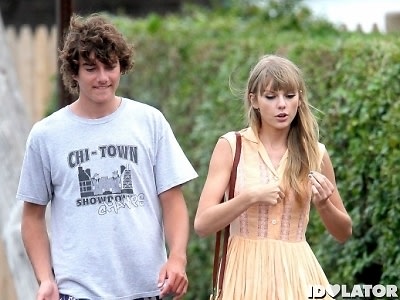 There is a lot of buzz surrounding the relationship between Conor Kennedy and Taylor Swift. DailyMail even called her the "new queen of Camelot."

Does the country crooner now have a political agenda? Taylor was rumored to be dating Patrick Schwarzenegger, whose mother is also a Kennedy, earlier this summer. I guess the Hollywood bad boys weren't doing it for her anymore.

Conor and Taylor have been spotted canoodling all over Cape Cod. Taylor even accompanied Conor to his recently deceased mother's grave (which was a little bit of an "awww" moment for us).

Nonetheless, these are the reasons why we're already sick of hearing about this new love match:

1. We'll hear all about it on the radio when her next album is released. Over and over again.

2. Not only is Conor only 18, but he is still in high school! Taylor, who is turning 23 in December, is encroaching on cougar status. Ew.

3. She'll be dating some new guy soon enough and, quite frankly, we're having trouble keeping up.

4. Jealousy. The girl has dated a majority of Hollywood's most eligible bachelors from Jake Gyllenhaal to Taylor Lautner and we'll admit to being green with envy. Share your secrets with the rest of us, TayTay.

5. Who cares. There are like a bajillion Kennedys now. Like we said, this is her second swing at the family.

We doubt this will last long enough for her to trade in her cowboy boots for some boat shoes, so go easy on the "Queen of Camelot" stuff, everyone.