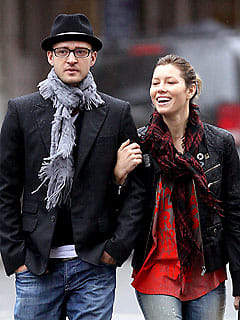 Justin Timberlake and Jessica Biel are in town! The power couple was spotted last night at Bourbon Steak at the Four Seasons in Georgetown. They, along with a bodyguard, stopped in for just a moment to greet people they knew at one of the bar's tables, a source told Guest of a Guest. They are likely staying at the Four Seasons for the duration of their Washington stay.

Tonight, Justin will be making his White House debut at an ultra-exclusive bash thrown by the Obamas. Al Green, Ben Harper, Queen Latifah, Cyndi Lauper, and others will be performing.

Earlier today, Justin tweeted about a workshop he is participating in with the First Lady.