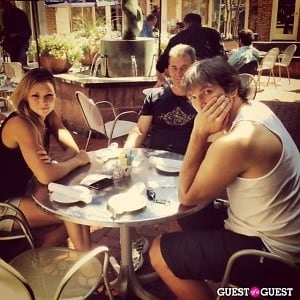 Today, we spotted Capitals hockey star Alexander Ovechkin, 26, having a late lunch at Kafe Leopold with his girlfriend, Maria Kirilenko, and a friend.

Kafe Leopold is a quaint Austrian cafe that is a sister restaurant to L2, the exclusive nightclub next door in Cady's Alley in Georgetown.

Maria, 25, just won a bronze medal for Russia in women's doubles with teammate Nadia Petrova at the London Olympics.

Fans of the international power couple took delight in Alex's tweets as he accompanied her to the games, including one tweeted photo that temporarily sparked rumors of an engagement.

Unless they jet to a fabulous vacation, the couple will likely be relaxing in Washington until the Capitals pick up their ice hockey practices again in early-to-mid September.

A source told Guest of a Guest they also had dinner at Cafe Milano last night.